The Dell Rapids St Mary Cardinals raced out to a 10-1 run to start the fourth quarter to put the game away against the Deubrook Area Dolphins on Tuesday, January 25th.  St Mary won the game 81-62.

The Cardinals held the advantage at the end of every quarter in the game.  St Mary led 16-12 at the end of the first quarter, and they were able to extend their lead to 42-31 by halftime.  The Dolphins cut the lead down to five points, 46-41, with 5:00 to play in the third quarter, but St Mary held off any rally and led 58-49 at the end of the quarter.  The 10-1 run in the first two and half minutes of the fourth quarter by the Cardinals put the game out of reach as St Mary led 68-50 at that point.

The Cardinals (8-4) will host Alcester-Hudson on Thursday, January 27th.

The Dell Rapids St Mary Cardinals and Mt Vernon/Plankinton Titans did battle at the Dakota Valley Conference classic on Saturday, January 22nd in Elkton.  The Titans had an early run in the first quarter to lead them to a 63-52 victory.

The Cardinals (7-4) will host the Deubrook Area Dolphins on Tuesday, January 25th.

Neither team was able to get a large lead in the game.  St Mary held the advantage after the first quarter, 15-14.  The first half ended with the two teams tied 28-28.  The Warriors held a four-point lead late in the third quarter, but John Pica made a three-pointer at the end of the quarter to cut the lead to 43-42.  Pica then made another three-pointer to start the fourth quarter to give the Cardinals a slim two-point lead.  The Warriors tied the game 47-47 with 6:20 to play.  St Mary then went on a 5-2 run over the next three minutes for a 52-49 lead.  St Mary continued to lead 52-50 with 1:07 to go.  After Castlewood was unable to tie the game, the Cardinals made a layup and then two free-throws in the closing seconds for the win. 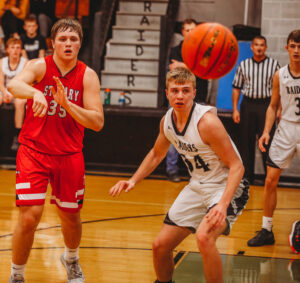 The Dell Rapids St Mary Cardinal boys handed the Oldham-Ramona/Rutland Raiders their first loss of the season at Rutland on Saturday, January 15th.  The Cardinals led for all but a few seconds at the beginning of the game in a 75-48 victory.

The Raiders made first basket of the game, and that was their only lead.  The Cardinals went on an 8-0 run from there and never looked back.  St Mary built an 18-11 lead by the end of the first quarter.  That lead grew to 18 points at 36-18 by halftime.  The game continued to go the Cardinals way throughout the second half as well.  St Mary led 56-31 after three quarters of play and extended the lead to 65-31 early into the fourth quarter on the way to the win.

St Mary had a 6-3 lead in the first quarter, but the Elks held a 14-10 advantage after the quarter ended.  The game remained close throughout the second quarter.  The Elks still held a lead, 21-19, at halftime.  St Mary tied the game 23-23 in the first thirty seconds of the third quarter, but was held to just three points the rest of the quarter.  Elkton-Lake Benton led 33-26 heading into the fourth quarter.

That lead grew to 41-28 midway through the fourth quarter.  The Cardinals tried to make a furious comeback.  A steal by Dylan Mathis and three-pointer by Ty Brown with :36 left in the game cut the Elks lead to 43-39.  That was as close as the Cardinals would get as the Elks made two free throws to close out the game.

The game wasn’t pretty, but the Dell Rapids St Mary Cardinal boys survived a rough night for a 33-25 win over the Garretson Blue Dragons on Tuesday, January 4th.  Both teams shot just 22% and each committed 19 turnovers.

The Blue Dragons had the slim advantage in the first half.  They had a two-point lead, 9-7, after the first quarter.  The lead was cut to just a single point, 14-13, at halftime.  St Mary used an 11-3 scoring advantage in the third quarter to have a 24-17 lead heading into the fourth.  The Cardinals were able to hold the lead for the 33-25 win.

The Cardinals (4-2) will travel to Estelline to face the Estelline/Hendricks Redhawks on Friday, January 7th. 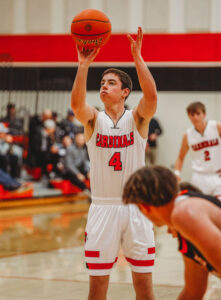 A late fourth-quarter run by the Deuel Cardinals gave them a victory over the Dell Rapids St Mary Cardinals at the boys Entringer Classic in Brookings on Friday, December 31st.  Deuel took the win 68-56.

The two teams went back and forth the first quarter.  The two teams ended the quarter tied 16-16.  The second quarter played just like the first with the two teams trading leads.  St Mary held a two-point 29-27 lead at halftime. 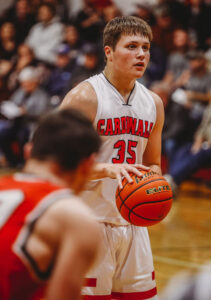 The Dell Rapids St Mary Cardinals survived a tough battle against the Chester Flyers at home on Tuesday, December 28th.  The Cardinals took the win 53-46 to improve to 3-1 on the season.

After the Flyers got the first basket of the third quarter, St Mary went on another big run the rest of the quarter.  The Cardinals outscored Chester 15-6 for a 41-28 lead heading into the fourth quarter.  The Flyers made a push to start the fourth quarter.  Chester closed the gap to 43-36, but back-to-back baskets by Ty Brown and John Pica extended the lead back to 47-36 with 3:15 to play in the game.  Chester, however, made one last comeback effort.  The Flyers got within four points, 48-44, but Brown and Pica put the game out of reach with two made free-throws each.

Pica finished with a game-high 18 points.  Brown added 10 points.  Dylan Mathis had nine points, and CJ Smith had eight points in the game.

The Cardinals (3-1) will play Deuel at the Entringer Classic in Brookings at 1:30 p.m. on Friday, December 31st. 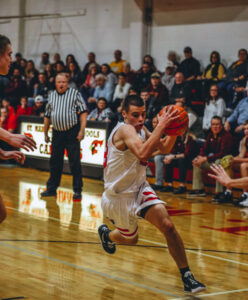 The Dell Rapids St Mary Cardinal boys basketball team hosted the #1 De Smet Bulldogs in their first home game of the season on Monday, December 20th.  The Cardinals hung with the Bulldogs most of the game, but De Smet was able to pull away late with a 60-42 win.

Both teams got after each other the entire game in a good, hard-fought battle.  The first quarter was back-and-forth with the Cardinals holding a 14-13 lead at the end of it.  St Mary continued to lead by two points, 19-17, with 4:45 to play in the half.  De Smet, however, outscored the Cardinals 15-6 the rest of the way for a 32-25 halftime lead.

St Mary (2-1) will host Chester on Tuesday, December 28th for their next game.