The Dell Rapids St Mary Cardinal track teams traveled to De Smet for the Dakota Valley Conference track meet on Thursday, May 12th. The girls finished fourth as a team with 72 points. The boys team placed seventh with 61 points. 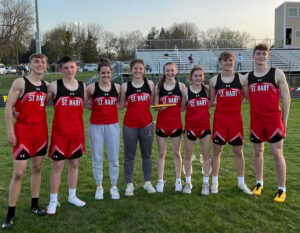 Photo taken and used with permission by Kinsey Griffin

The Dell Rapids St Mary Cardinal golf teams traveled to Arlington for the Dakota Valley Conference Tournament at Lake Region Golf Club on Monday, May 9th.  The girls team finished fifth with a total score of 337.  The boys team finished 10th with a score of 358.

Aiden Allen finished with a 116 for the low score for the boys.  Brandon Cook had a round of 119, and Levi Gaul finished at 123. 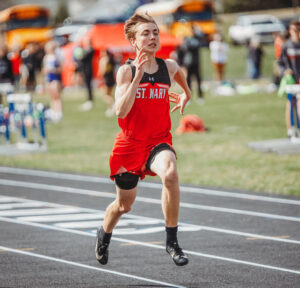 The Dell Rapids St Mary Cardinal track teams were in Baltic for the Baltic Invite on Tuesday, May 3rd.  The girls team finished fifth with 69 points.  The boys team was eighth with 37 points.

Lucas Flemmer finished first in the 200m dash, second in the 100m dash, and second in the 400m dash.  John Pica was sixth in the discus and seventh in the shot put.  CJ Smith placed seventh in the triple jump.  The 4x200m relay team of Tate Bunkers, Nic Gaspar, Smith, and Flemmer finished sixth.  The 4x100m relay team of Bunkers, Kyle Bares, Wyatt Geraets, and Pica had a seventh place finish.

The Dell Rapids St Mary Cardinal girls golf team won the Colman/Egan Golf Invite on Thursday, May 5th.  The girls finished with a team score of 343.  Chester was second with 362.  The Cardinal boys teams finished fifth with a score of 355.

Rebecca Heinemann finished third individually with a round of 102.  Rachel Heinemann was fifth with a 116.  Carly Roiger was sixth at 125, and Brianna Weiland finished eighth with a 132.

SIx varsity golfers for the Dell Rapids St Mary Cardinals competed in the Baltic Invitational at Northern Links Golf Course in Renner on Tuesday, May 3rd.  Four golfers on the girls team and two for the boys team took part in the tournament. 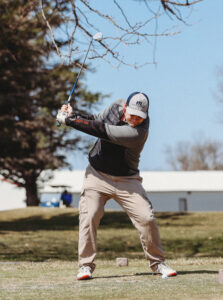 Rachel Heinemann had a round of 114.  Rebecca Heinemann finished with 115, and Brianna Weiland had a round of 132 for the girls team.  Carley Roiger, Rylee Klein, and Sophia Lack golfed nine holes as extra golfers for the Cardinals.  Roiger had an 80, Lack an 81, and Klein a round of 90.