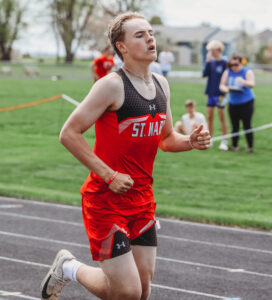 The Dell Rapids St Mary Cardinal track team was in Chester for the Region 4B meet on Wednesday, May 18th.  The girls team finished third with 94 points.  The boys team placed fifth with 50 points.

Nic Gaspar took the region title in the high jump.  CJ Smith was third in the 400m dash and the triple jump.  John Pica placed fourth in the discus, and Wyatt Geraets had a fourth place finish in the triple jump.