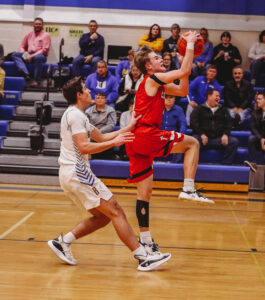 The Dell Rapids St Mary Cardinal boys extended their winning streak to eight after a 65-32 road win over the Baltic Bulldogs on Friday, February 18th.

At an early point in the first quarter, the Cardinals led by just one point at 5-4.  That margin was quickly extended to 10 points after a 9-0 run for a 14-4 lead with 2:15 to play in the first quarter.  St Mary ended the first quarter with a 20-6 lead and continued to roll from there.  They grew the lead to 37-14 by halftime and also led 58-23 at the end of the third quarter.

St Mary (15-4) will finish the regular season at home against Bridgewater-Emery on Friday, February 25th.