Bitzer and Parker Zweifel both had a hit in the game, and Heinemann had an RBI.  Bitzer also pitched and recorded four strikeouts.  Luke Symens pitched 1 2/3 innings and had three strikouts.

Dell Rapids scored in four straight innings to win a back-and-forth game against Tri-Valley.  Both teams scored a run in the second inning, and then they both had big third innings. 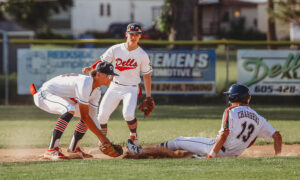 The Dell Rapids Legion baseball team had a three-day break from games after playing nine games in a total of six days between June 10th and June 16th.  The break proved to be helpful as Dell Rapids defeated Sioux Falls Christian 14-4 at home on Monday, June 20th.

Sioux Falls Christian plated three runs in the top of the first, but Dell Rapids responded with nine runs in the bottom of the inning.  They would go on to score in every inning of the game.  Sioux Falls Christian got a run in the top of the second.  Dell Rapids had a single run in the second, two in the third, one in the fourth, and another in the fifth to win on the 10-run rule.

Ruesink pitched four innings and allowed four runs, two earned, on six hits and a walk with seven strikeouts.  Jaton pitched an inning and allowed a hit and recorded a strikeout.

Madison Gold broke a 3-3 tie with six runs in the top of the fifth inning and won 10-3 over Dell Rapids on Monday, June 20th.

Madison Gold, however, took control of the game in the fifth.  They scored six runs all with two outs.  Madison added another run in the top of the seventh.

Ruesink had two doubles and an RBI.  Carr finished with a double and two RBIs.   Cooper Frost, Grady Lamer, and Carson Crosby all had singles.  Tad Tjaden pitched four innings and allowed three runs, two earned, on two hits and five walks with eight strikeouts.  Ruesink pitched 1 1/3 innings and walked two with three strikeouts.  Carr pitched an inning and allowed a run on a hit and three walks with two strikeouts.  Mason Stubbe pitched 2/3 of an inning and allowed six earned on five hits and three walks and had one strikeout.

The Dell Rapids Mudcats got three of their five hits in the bottom of the seventh and scored a 1-0 walk-off win over the Alexandria Angels in the Cornbelt League / Sunshine League Showdown in Humboldt on Sunday, June 19th.

Along with hits by Peters, Regas, and Olson, Abrahamson also had a hit.  Regas finished with two hits.  Dalton Lehnen pitched all seven innings allowing just three hits while striking out nine batters.

Dell Rapids PBR scored three times in the third inning and held on for a 3-1 win over the Crofton Blue Jays in the Cornbelt League / Sunshine League Showdown in Humboldt on Saturday, June 18th.

Riley Calhoon hit an RBI sacrifice fly for the first run of the game.  Trey Randel brought home two runs with a two-out single for a 3-1 lead.  Crofton, which was held to just one hit, scored on an error in the top of the fourth inning.

Randel had a hit and two RBIs.  Calhoon had a hit and an RBI.  Grant Sweeter finished with a double.  Riley Hoffman and Tim Wilhelmsen both had a hit as well.  Beau Behrend pitched seven innings and allowed an unearned run on a hit and walk while striking out 10 batters.

The final score will read 11-3 in favor of Dell Rapids PBR, but the game took 17 innings to get to that point in Colman on Thursday, June 16th.  Both Dell Rapids PBR and Colman scored two runs each late in the game, and then remained tied 3-3 four eight innings.

Beau Behrend had an RBI single in the top of the second to give PBR an early 1-0 lead.  Colman tied the game in the bottom of the fourth.  The score remained 1-1 until the top of the eighth.  Teagan Schlimgen scored on a passed ball, and Behrend scored on an error to give the lead back to PBR, 3-1.  Colman got one run back on an RBI groundout, and then the tying run with two outs to send the game into extra innings.

PBR finally broke through in the top of the 17th.  Back-to-back singles, and walk, and an RBI single by Conner Spindler broke the 3-3 tie.  Dell Rapids continued to ride the momentum and the next three batters reached pushing the score to 8-3.  They would score three more times before their half of the inning was done.

Riley Calhoon had three hits.  Behrend had two hits and two RBIs.  Weston Hanson, Spindler, and Randel all had two singles and an RBI.  Grant Sweeter had two hits, one a double.  Riley Hoffman also had two hits.  Schlimgen and Tim Wilhelmson both had a single.

The Dell Rapids Mudcats got back into the win column, snapping a five-game losing streak, with a 12-1 win over Madison on Thursday, June 16th.

Dell Rapids scored two runs in the second inning, three more in the third, and another in the sixth for a 6-0 lead.  Madison got their only run in the bottom of the sixth inning.  The Mudcats then picked up two more runs in the seventh and four in the eighth.

Kris Regas had three hits and an RBI.  Mark Abrahamson had a two-run home run in the game.  Ty Hoglund finished with a double and two RBIs.  Trevor Freudenthal, Dalton Allen, and Elijah Story all had hits.  Logan Stone had an RBI.

Regas earned the win on the mound allowing one run on four hits while striking out 18 batters. 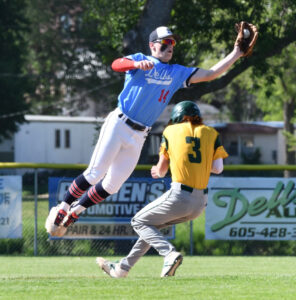 Dell Rapids then put together a rally in the bottom of the sixth.  Aiden Boechler drove in two runs with a single to cut the lead to 4-3.  CJ Smith gave Dell Rapids the lead with a two-run single to center field.  Thompson got two runners on base with two outs, but the game ended with a ground out to Smith at first.

Landon Ruesink had two hits.  Boechler and Smith both had a single and two RBIs each.  Brayden Pankonen, Dylan Mathis, and Joe Rechtenbaugh all had singles.  Henry finished with an RBI.  Treyse Eastman started on the mound and pitched four innings allowing two runs, one earned, on four hits and three walks with two strikeouts.  Henry got the win with three innings pitched.  He allowed two unearned runs on two hits and a walk with three strikeouts.

Tjaden had two hits and an RBI.  Fersdahl had a hit and RBI.  Cole Ruesink finished with a double.  Sutton Williams, Cooper Frost, and Quinn Carr all had singles.  Lamer and Crosby each had an RBI.  Konrad Richeal pitched four innings and allowed three unearned runs on two hits and three walks with two strikeouts.  Crosby pitched three innings giving up two hits and four walks with five strikeouts.

A three-run first inning by Dakota Valley proved to the difference in a 5-2 win over Dell Rapids on Wednesday, June 15th at North Sioux City.

Dell Rapids only had two hits in the game.  Mathis had an RBI single, and Joe Rechtenbaugh had a single.  Rechtenbaugh pitched six innings and allowed five runs, four earned, on eight hits and five walks with five strikeouts.