Madala Hanson was a first time all-conference selection for the girls.  Ella Griffin was named to the second team, and Addyson Gilbert was an honorable mention.  John Pica and Dylan Mathis were second team all-conference selections.  Nic Gaspar was named to the third team, and Ty Brown was an honorable mention. 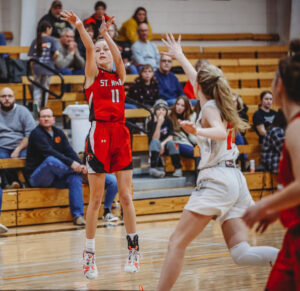 Howard went on a 10-0 run to end the third quarter which carried the Tigers to a 60-46 win over the Dell Rapids St Mary Cardinals in the opening round of the Region 4B tournament in Howard on Tuesday, February 22nd.

The Cardinals opened the game on a 12-2 run and led 20-13 at the end of the first quarter.  The Tigers went on a 9-0 run in the second quarter to take a 22-20 lead.  The two teams traded baskets the remainder of the quarter, and Howard led 28-26 at halftime.  Most of the third quarter was back and forth as the two teams were tied 36-36.  Addyson Gilbert made a three-pointer to give the Cardinals a 39-36 lead.  That’s when the Tigers finished the third quarter on a 10-0 run for a 46-39 lead going into the fourth quarter.  Howard carried the momentum into the fourth quarter and outscored St Mary 14-7 for the win.

The Cardinals season ends with an overall record of 11-10. 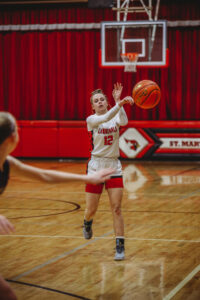 Free throws and rebounds were the big key to the game between the Dell Rapids St Mary Cardinals and Centerville Tornadoes on Tuesday, February 15th.  The Cardinals celebrated their two seniors, Addyson Gilbert and Courtney Brown, but it was the Tornadoes that celebrated the win, 55-49. 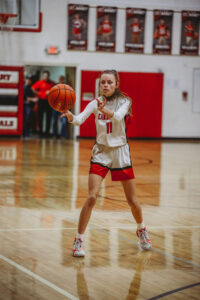 The Tornadoes had a seven-point lead, 13-6, at the end of the first quarter.  The Cardinals were able to cut that lead down to two points, 19-17, but Centerville pushed the lead to 29-21 by halftime.  The Cardinals still found themselves trailing heading into the fourth quarter, 38-31.  St Mary again got the game within a single possession, but could never quite complete the comeback as the Tornadoes held for the win.

The regular season ends for the Cardinals with an 11-9 record.  St Mary will begin Region 4B play on Tuesday, February 22nd.

St Mary got out to a quick 8-0 start, but the Divers pulled within six points by the end of the first quarter, 17-11.  That was as close as Lake Preston would get.  The Cardinals outscored Lake Preston 22-10 in the second quarter for a 39-21 halftime lead.  They continued to come big on the defensive end which led to easy layups in the second half as well.

The Cardinals will host Centerville in their final regular season game on Tuesday, February 15th.

The Dell Rapids St Mary Cardinals girls trailed by 14 points early in the fourth quarter to the McCook Central/Montrose Fighting Cougars.  St Mary got within two points, but couldn’t quite complete the comeback at the DWU Classic on Friday, February 10th.  The Cougars made enough free throws in the closing moments to hang on to a 55-48 win.

St Mary took advantage of cold shooting and turnovers by the Cougars in the first quarter.  The Cardinals led 12-7 at the first quarter break.  Unfortunately for the Cardinals, shots stopped falling in the second and third quarters.  McCook Central/Montrose scored 19 points in the second quarter and held a 26-25 halftime lead.  St Mary then scored just five points in the third quarter, and the Cougars led 41-30 going into the fourth quarter.  The Cardinals made their comeback in the fourth quarter, but came up just short.

The Cardinals will travel to Lake Preston for a make-up game on Monday, February 14th. 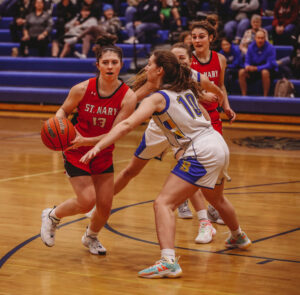 Playing in their second straight day, the Dell Rapids St Mary Cardinal girls survived the Baltic Bulldogs for a 66-61 win on Tuesday, February 8th in Baltic.

The Cardinals got out to a big lead in the first quarter.  They led 27-9 by the quarter break.  Baltic made a big run in the second quarter, outscoring St Mary 22-9 to cut the lead to 36-31 at halftime.  The Bulldogs got the lead down to one point heading into the fourth quarter, 46-45.  St Mary went on a 10-4 run to start the fourth quarter to extend their lead to 56-49 with 5:55 to go in the game.  The Bulldogs pulled within two points again, 60-58, with 2:00 go.  St Mary pushed the lead back to six points, 64-58, with just under a minute to play.  Baltic was only able to get within three, 64-61, before St Mary sealed the victory with two free throws in the closing seconds.

The Cardinals will play McCook Central/Montrose in Salem on Friday, February 11th at 11:30 a.m. at the DWU Classic. 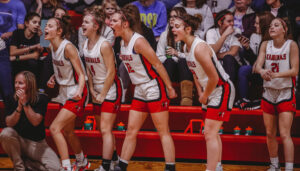 A fourth-quarter rally by the Dell Rapids St Mary Cardinal girls was cut short by Arlington on Monday, February 7th.  Arlington held off the rally for a 60-51 win.

The Dell Rapids St Mary Cardinals used a strong first half for a 64-49 road win over the Hills-Beaver Creek Patriots on Monday, January 31st.

The Dell Rapids St Mary Cardinal girls ended a three-game losing streak with a 60-42 win over the Alcester-Hudson Cubs at home on Thursday, January 27th.

The two teams traded blows in the first two quarters.  The Cardinals delivered the first blow and built a 14-5 lead by the end of the first quarter.  The Cubs responded in the second quarter outscoring St Mary 17-10.  The Cardinals led 24-22 at halftime.

The Cardinals (8-6) will travel to Hills-Beaver Creek on Monday, January 31st.

The Dell Rapids St Mary Cardinal girls basketball team traveled to Howard for a Region 4B battle against the Tigers on Monday, January 24th.  Despite a fast start, the Cardinals fell to the Tigers 50-64.

The Cardinals (7-6) will host the Alcester-Hudson Cubs on Thursday, January 27th.