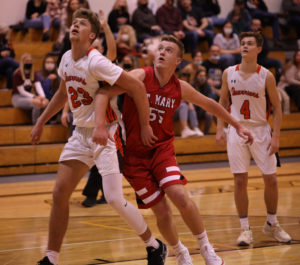 The atmosphere was slightly different than last year in the Dell Rapids versus Dell Rapids St Mary boys basketball game, but the battle was just as intense.  Last season’s Entringer Classic battle was held in Brookings to almost full gym.  This year the game was held in Colman with fan restrictions, but the Quarriers and Cardinals put on another great game for the fans on Thursday, December 31st.

The score remained close throughout much of the game before the Quarriers pulled away in the final minutes for a 71-56 victory.

The Quarriers opened the game with a 6-0 before the Cardinals were able to take their first shot of the game.  Dell Rapids ended the first quarter leading 16-8.  St Mary chipped away at the lead in the second quarter and pulled within a point at 22-21 with 2:15 to play in the half.  Dell Rapids was able to push the lead back to four points by halftime at 30-26.

The Cardinals again got the game within a point early in the third quarter.  A three-point shot by Ashaun Roach-Valandra with 5:50 to go in the quarter made the score 32-31 in favor of the Quarriers.  Dell Rapids was again able to respond and slowly pushed their lead to six points at 46-40 heading into the final quarter. St Mary went on an 8-4 run in the first two minutes of the fourth quarter to get within two points at 50-48, but the Quarriers answered with a 10-0 for their largest lead of the game at 60-48.  They continued with that momentum the rest of the game for the 71-56 win.

The Quarriers had four players finish in double figures.  Brayden Pankonen had a game-high 23 points with two rebounds and two steals.  Colin Rentz, named the game’s MVP, had 22 points, seven rebounds, seven assists, and three steals.  Carter Nelson had a double-double with 10 points and 10 rebounds plus two blocked shots.  Coby Maeschen also finished with 10 points and had seven rebounds.