Five Quarrier basketball players, three from the boys team and two from the girls team, were recognized as Dak-12 All-Conference selections for the 2021-2022 season. 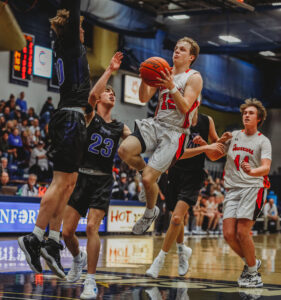 The #2 Dell Rapids Quarriers fell to the #3 Sioux Falls Christian Chargers in the Region 3A tournament at the Elmen Center on Friday, March 4th.  The Chargers led at each quarter break, though each team held a lead in the second half, and won 62-57.

The Quarriers got the game tied 35-35 with 3:25 to play in the third quarter.  Dell Rapids regained the lead after a three pointer by Landon Ruesink with 2:25 to play in the quarter.  The Quarriers lead 41-39 with 1:00 left, but the Chargers ended the quarter on a 5-0 run for a 44-41 lead.  The Chargers were able to extend their lad to eight points, 57-49, with 3:15 left in the game.  Dell Rapids got within a point, 58-57, after another Ruesink three pointer with :50 left.  The Chargers made a free throw to lead 59-57 with :35 to go.  Dell Rapids had an opportunity to tie the game, but the shot was no good with :14 to play.  Sioux Falls Chrisitan made three free throws in the closing seconds to hang on for the win.

The Quarrier season ends with a record of 15-7.

At moments it looked like the #2 seed Dell Rapids Quarriers were going to blow the game wide open against the #7 seed Tri-Valley Mustangs.  The Mustangs threw everything they could at the Quarriers, but the Quarriers took the 75-67 win on Tuesday, March 1st.

The first half was a low-scoring battle. Dell Rapids held a 10-9 lead at the end of the first quarter. They were able to push the lead to 10 points in the second, but the Mustangs battled back to cut the lead down to 27-24 by halftime.

Tri-Valley scored the first four points of the third quarter and led 28-27 with 7:20 left in the quarter. The lead was short lived, however, as Dell Rapids went on a 12-2 run for a 39-30 lead with 4:45. That lead grew to 17 points, 54-37, with just :35 left in the quarter.  At this point it seemed the Quarriers were going to be able to cruise to victory.  The Mustangs, however, drained a half-court shot at the buzzer to make the score 54-40 heading into the final quarter.  That shot gave Tri-Valley new life.  They slowly chipped away at the Quarrier lead in the fourth quarter and got it down to 63-59 with 2:10 to play in the game.  Dell Rapids was able to shut down the rally and outscored the Mustangs 12-8 over the final two minutes to secure the win.

The Quarriers will play #3 seed Sioux Falls Christian on Friday, March 4th at 8:00 p.m. at the Elmen Center.  The winner will advance to the SoDak 16. 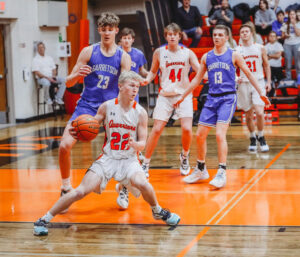 The Dell Rapids Quarriers survived for a 65-55 win over the Garretson Blue Dragons in their regular season finale at home on Monday, February 21st.

Dell Rapids finishes the regular season with a 14-6 record.  They will host a Region 3A opening round game on Tuesday, March 1st. 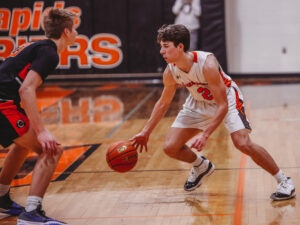 The Dell Rapids Quarrier boys basketball team got a big Dak-12 Conference win over the Lennox Orioles at home on Friday, February 18th.  The Quarriers fought their way to a 55-50 victory.

Neither team led by any more than seven points the entire game in the back and forth battle.  Lennox had 9-4 lead early in the first quarter, but Dell Rapids responded with an 8-0 run and finished the first quarter leading 16-12.  The Orioles were able to old Dell Rapids to just eight points in the second quarter and took a 27-24 lead into halftime.

Lennox had a game-high seven-point lead, 31-24, after a 4-0 run to start the third quarter.  The Quarriers went on an 15-3 run to lead 39-34 with 2:40 to play in the third quarter.  The Orioles got the lead down to one, 41-40, heading into the fourth quarter.  The two teams traded leads of two points throughout the fourth quarter.  With the game tied 48-48 with 1:00 to go, Dell Rapids took the lead for good in a key offensive sequence.  Landon Ruesink made a layup and was fouled with :51.6 left on the clock.  Ruesink missed the free throw, but Aiden Boechler tipped the rebound out to Ruesink.  Brayden Pankonen then made a layup with :35 left to play as Dell Rapids scored four points on one trip to their end of the floor for a 52-48 lead.  The Quarriers made three of four free throws in the closing seconds for the win.

Dell Rapids (13-6) will end the regular season at home against Garretson on Monday, February 21st.

The Dell Rapids Quarriers played the #2 St Thomas More Cavaliers at the DWU Classic in Salem on Saturday, February 12th.  The game was less than 24 hours after Dell Rapids played #1 Dakota Valley.

The Quarriers had a 10-3 lead late in the first quarter, but the Cavaliers went on a 9-0 run for a 12-10 lead at the end of the quarter.  Dell Rapids regained the lead at 14-13 early in the second quarter, but that was the last lead they had.  St Thomas More led 25-22 at halftime.  The Cavaliers extended their lead to 40-32 at the end of the third quarter.  They outscored Dell Rapids 12-9 in the final quarter for the 52-41 win. 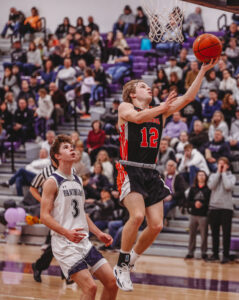 Dakota Valley led 20-7 after the first quarter.  Dell Rapids cut the lead by two points by halftime and trailed 41-30 after the first two quarters of play.  The Quarriers got the Panther lead into single digits after scoring the first basket of the third quarter, but that was as close as they could get.  Dakota Valley extended the lead to 53-37 at the end of of the third quarter.  The Panthers outscored Dell Rapids 22-18 in the final quarter.

In a big match-up between two teams with an 11-4 record, the Dell Rapids Quarrier boys earned a tough road win over the Mt Vernon/Plankinton Titans on Tuesday, February 8th.  The Quarriers pulled away late for an 80-68 victory.

The game went as expected with back-and-forth battles all night long.  Dell Rapids had the early advantage, 16-13, at the end of the first quarter.  The Quarriers slowly built a seven point lead by the end of the first half and led 34-27 at halftime.  Their lead grew to 13 points, 46-33, with 5:25 to play in the third quarter.  The Titans made a run and cut the lead down to 48-46 with 1:20 left in the quarter.  The Quarriers pushed the lead back to five points, 54-49, by the start of the fourth quarter.

Mt Vernon/Plankinton started the fourth quarter on a little bit of a run.  They cut the five-point lead down to two points, 58-56, with 6:00 to go in the game.  The lead was still only two points, 62-60, with 4:30 on the clock.  Dell Rapids then went on a 7-0 run to lead 69-60 with 2:00 to go in the game.  The Quarriers made some big three-point shots and got some break-away layups after steals to seal the victory.

The Quarriers (12-4) will travel to Dakota Valley on Friday, February 11th.

The two teams traded blows in the first half.  The Quarrires were able break away for a five point lead by the end of the first quarter.  Dell Rapids led 22-17 at the quarter break.  That lead was short lived as Tri-Valley was able to get a four-point lead, 35-31, with 1:50 to play in the second quarter.  The Quarriers ended the half on a 10-1 run for a 41-36 halftime lead.

Dell Rapids was able to hold the lead throughout the entire second half.  The advantage grew to double digts, 56-44, heading into the fourth quarter.  Tri-Valley tried to make a run late in the game, getting within five points, but Dell Rapids made enough free-throws in the closing minute in the win. 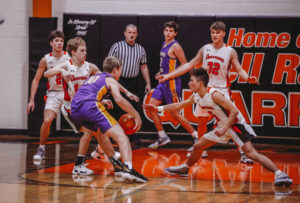 The Dell Rapids Quarriers had a three-game winning streak come to an end on Tuesday, February 1st.  The Quarriers hosted the Flandreau Fliers, and the Fliers used a third quarter run for a 64-51 win.

The first half was played close.  Flandreau had a three-point lead at the end of the first quarter, 13-10.  The Fliers also held the lead, 25-21, at halftime.  It was a third quarter run by Flandreau that was the difference in the game.  The Fliers scored the first seven points of the second half and led 32-21.  The lead continued to grow as the Fliers led 44-30 at the end of the third quarter.  With 3:15 in the game, Flandreau led 58-40.  Dell Rapids went on a 9-0 run in the next minute to cut the lead to 58-49, but Flandreau ended the game outscoring the Quarriers 6-2.