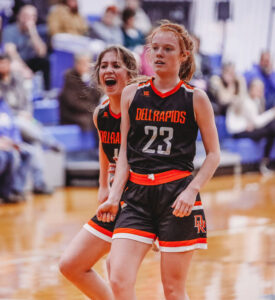 The Dell Rapids Quarrier girls used momentum from a 10-0 run in the first quarter for a 60-46 road win over the Elkton-Lake Benton Elks on Tuesday, January 25th.

Dell Rapids continued to slowly grow the lead in the third quarter.  The advantage grew to 44-33 by the end of the quarter.  The Quarriers continued to put the pressure on the Elks in the fourth quarter and led by almost 20 points before finishing with the 60-46 win.

Alli De Stigter had a team-high 13 points along with two assists.  Claire Wynja had 11 points and five rebounds.  Liz Price finished with eight points and seven rebounds.  Jayme Schmidt and Haleigh Barnhart both finished with seven points.  Mady VanOverbeke and Jenna Miller both had five points each.

After a hard-faught loss over the weekend, the Quarrier JV team bounced back by picking up a huge win over the Elks, 50-16.  Jenna Miller had 17 points, four steals, and two assists.  Kerrigan Kindopp had 10 points and seven steals.  Clara Justice finished with 10 points, five rebounds, two steals, and five assists.  Shelby Welbig had six points, seven rebounds, and four assists.  Elly Olson added four points and four steals.  Adah Cavigelli had two points, and Taylor Schmidt had one point, three assists, and a steal. 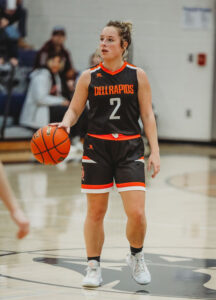 The Dell Rapids Quarriers led for most of the game, but the Elk Point-Jefferson Huskies rallied in the fourth quarter for a 54-47 win on Saturday, January 22nd.

The Quarriers were able to push their lead back to double digits, 34-24, with 4:00 to play in the third quarter, but the Huskies cut that lead in half by the end of the third quarter.  Dell Rapids held a 38-33 lead heading into the fourth quarter.  Elk Point-Jefferson scored the first six points of the fourth quarter to take a 39-38 with 5:45 to play.  Dell Rapids regained the lead 44-41 after a three pointer by Mady VanOverbeke with 2:45 to play, but the Huskies outscored Dell Rapids 13-3 the rest of the game.  Elk Point-Jefferson made all 10 of their free throws in the final quarter.

The Quarriers (1-12) will travel to Elkton-Lake Benton on Tuesday, January 25th.

The Dell Rapids Quarrier girls basketball team hosted the Sioux Valley Cossacks on Friday, January 21st.  Leading by just one point with 4:30 to go in the second quarter, the Cossacks pulled away from the Quarriers for a 57-31 win. 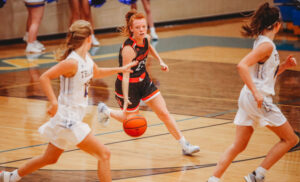 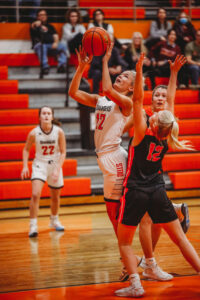 The Dell Rapids Quarrier girls nearly overcame a double-digit deficit in the second half against the Lennox Orioles on Monday, January 10th.  The Quarriers trailed by 13 points early in the second half, but the Orioles held for a 46-42 win.

Lennox led by two points at the end of the first quarter, 10-8.  The Orioles pushed that lead to 10 points by halftime at 29-19.  Lennox scored the first three points of the third quarter for a 32-19, but the Quarriers did not allow another point to the Orioles the rest of the quarter.  That allowed Dell Rapids to go on a 10-0 the rest of the quarter to pull within three, 32-29.

The Quarriers scored the first basked of the fourth quarter, making the score 32-31.  Lennox, however, went on a 13-4 run to push their lead to 45-35 with 2:30 to play in the game.  Dell Rapids had one more run in them.  The Quarriers scored seven in a row cutting the lead to 45-42 with a minute to play.  The Lennox defense stopped a game-tying play with a steal, and made a free-throw to hold on for the win. 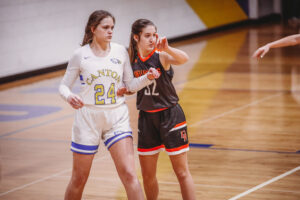 The constant pressure defense by the Canton C-Hawks made things difficult for the Dell Rapids Quarriers on Thursday, January 6th.  Canton forced 32 turnovers, 17 of those on steals, on their way to a 69-46 win over the Quarriers.

The pressure defense got to the Quarriers early in the ball game.  Canton built an 18-7 lead at the end of the first quarter, and that lead grew to 23 points by halftime, 46-23.  The quick steals and fast breaks led to more of the same in the third quarter as the C-Hawks extended the lead to 63-36.

The below zero temperatures outside Canton High School seemed to have followed the Quarrier JV shooters into the gym as they fell to the C-Hawks JV team 24-46.  Struggles shooting from the floorr along with too many turnovers resulted in the young Quarriers loss after having won three games in a row.

The Cougars made the first three-pointer of the game, but that was their only lead.  The Quarriers responded with a 7-0 and continued to hold the lead, 12-9, at the end of the first quarter.  Mady VanOverbeke made a three-pointer with 4:10 to play in the second quarter to give Dell Rapids their largest lead of the game.  They led 24-12 at that point.  McCook Central/Montrose finished the half on an 8-2 run, but Dell Rapids still led 26-20 at halftime.

The Quarriers were able to maintain their lead throughout the third quarter.  Dell Rapids led by seven, 36-29, going into the fourth quarter.  Another three-pointer, this time by Maggie Schmidt, pushed the Quarrier lead to double digits at 41-31 with 4:00 to go.  The Cougars cut the lead down to four points, 43-39, with :15 to go, but Zoey Hilmoe made two free throws just seconds later to seal the victory.

After having their lead cut to just one point early in the second quarter, the Flandreau Fliers went on a big run the rest of the game for a 64-30 win over the Dell Rapids Quarriers on Thursday, December 30th.

Flandreau took that momentum into the second half.  They held Dell Rapids to just seven points in the third quarter and built a 51-26 lead at the quarter break.  The Fliers then outscored the Quarriers 13-4 in the final quarter in the win.

The Dell Rapids Quarrier girls nearly completely a comeback against the Milbank Bulldogs on Tuesday, December 28th.  After trailing by 10 points in the third quarter, Dell Rapids tied the game late in fourth quarter, but the Bulldogs held for the 49-43 win.

Milbank went on an early run in the first quarter.  After a 2-2 tie, the Bulldogs scored nine straight for a 11-2 lead with 3:00 to play in the quarter.  The Quarriers got within five points by the end of the first quarter, 14-9.  Dell Rapids used a strong pressure defense in the second quarter to tie the game 17-17 with 3:35 left in the half.  Maggie Schmidt gave Dell Rapids a 22-20 lead with :42 on a made three-pointer, but Milbank got the last three points of the first half for a 23-22 lead.

The Bulldogs were able to avoid the full-court pressure defense by the Quarriers in the third quarter.  Dell Rapids couldn’t get into their press as often as they wanted which helped Milbank build a 35-25 lead with 2:45 to go in the third quarter.  Alli De Stigter scored five straight points for the Quarriers to cut the lead in half, but Milbank led 37-30 heading into the final quarter.

Milbank pushed their lead back to nine points, 43-34, with 5:00 to play in the game.  Dell Rapids then went on an 9-0 run.  Liz Price tied the game with a layup with 3:00 to go in the game.  The Quarriers had a couple of opportunities to take the lead, but the shots just wouldn’t fall.  The Bulldogs scored their next six points from the free-throw line for the win.

Haileigh Barnhart and M. Schmidt had 12 points each.  Price finished with six points.  De Stigter ended the game with five points.  Claire Wynja and Jayme Schmidt each had three points, and Mady VanOverbeke had two points.

The Quarriers JV basketball team defeated Milbank in a 31-29 thriller.  Jenna Miller led the team with 13 points.  Shelby Welbig had nine points.  Elly Olson finished with seven points, and Kerrigan Kindopp and Clara Justice each had a point.

The Dell Rapids Quarriers girls basketball team hosted the Garretson Blue Dragons in their final home game prior to Christmas on Tuesday, December 21st.  The Blue Dragons used a strong defense and quick offensive start to get a 66-43 win over the Quarriers.

The Blue Dragons only missed eight total shots in the first half, four two-pointers and four three-pointers.  The Quarriers tried to keep pace throughout the first two quarters.  Garretson built a 19-10 lead by the end of the first quarter and then extended the lead to 37-22 at halftime.

The offense cooled down in the second half, but their defense continued to be strong all game.  Dell Rapids was only to get eight points in third quarter.  The Quarriers stayed close with Garretson in the fourth quarter and were only outscored 14-13.  The Blue Dragon defense forced 24 Quarrier turnovers.

Dell Rapids (0-5) will travel to Milbank on Tuesday, December 28th.

The Lady Quarrier JV basketball team simply ran out of time in their come back bid against the Garretson Blue Dragon JV team Tuesday night in the Dell Rapids high school gym, losing 29 – 38.  After three sluggish quarters of basketball, the young Quarriers came to life scoring 16 points in the final quarter. Howerver, the Garretson lead was simply too large for Dell Rapids to overcome despite the Quarriers’ gutty performance.