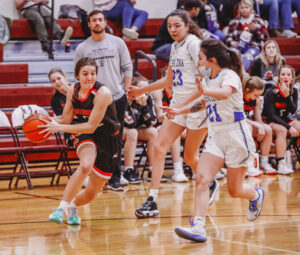 The Dell Rapids Quarrier girls built a big lead by the end of the third quarter and got a 65-52 win over the Tiospa Zina Wambdi on Saturday, February 5th.  Tiospa Zina and Dell Rapids played in Madison at the Dak-12/NEC Clash.

The Quarriers had a lead at the end of every quarter break in the game.  Dell Rapids led 15-8 at the end of the first quarter.  The lead grew to 10 points by halftime, 30-20.  Dell Rapids outscored Tiospa Zina  22-12 in the third quarter and led 52-32 going into the fourth quarter.  The Wambdi scored 20 points in the fourth quarter, but the Quarriers held for the win.

Price was named the game’s MVP.