The Dell Rapids Quarrier girls golf team completed their 2022 season with a trip to the South Dakota State A Golf Tournament at Bakker Crossing Monday, June 6th and Tuesday, June 7th.  The Quarriers finished ninth as a team with a two-day score of 820.

The entire Dell Rapids Quarrier girls golf team qualified for the state tournament after a third place finish at the Region 1A tournament in Madison on Thursday, May 26th.

Dell Rapids finished with a team score of 409, one shot better than fourth-place Aberdeen Roncalli (410).  Madison placed first with a 381, and Sioux Valley was second with a 397.

The State A Tournament will be held at Bakker Crossing in Sioux Falls on Monday, June 6th and Tuesday, June 7th.

The Dell Rapids Quarrier girls golf team finished ninth at the Dak-12 Conference Tournament at Bakker Crossing in Sioux Falls on Monday, May 23rd.  Dell Rapids finished with a team score of 426.  Sioux Falls Christian took first place with a score of 338.  Vermillion was second, followed by Canton.

The Quarriers will be in Madison for the Region 1A Tournament on Thursday, May 26th.

The Quarriers will be at the Dak-12 Conference Tournament at Bakker Crossing in Sioux Falls on Monday, May 23rd. 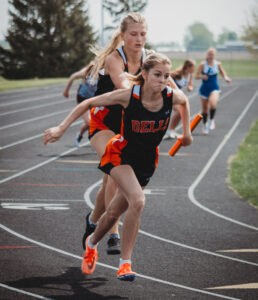 The Dell Rapids Quarrier track team was in Lennox for the Region 3A track meet on Thursday, May 19th.  The girls team finished tied for fourth with 61 points.  The boys team finished fifth with a total of 47 points. 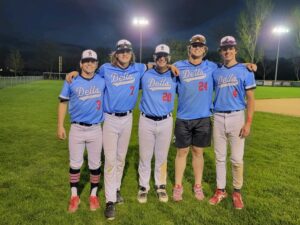 Photo taken and used with permission by Tammy Henry

The 2022 regular season came to an end for Dell Rapids baseball on Wednesday, May 18th.  Dell Rapids hosted Hanson/Bridgewater/Emery (HBE) and Baltic winning both of those games on a senior night.  The two wins gave Dell Rapids a seven game winning streak.

In the first game of the night, Dell Rapids scored nine runs in the bottom of the sixth inning to defeat HBE 14-4 on the 10-run rule.

HBE scored two runs in the top of the first inning, but Dell Rapids scored four runs of their own in the bottom of the inning, all with two outs.  Dylan Mathis hit an RBI sacrifice fly, Aiden Boechler had an RBI single and scored on an error, and Will Jaton scored on an error for a 4-2 lead.  Each team scored a run in the third inning.  CJ Smith had an RBI sacrifice fly for Dell Rapids.

HBE got a run in the top of the sixth inning to pull within a run, 5-4, but Dell Rapids’ offense went to work in the bottom of the inning.  Braden Fersdahl scored on an error.  Landon Ruesink added an RBI double to increase the lead to 7-4.  Then with two outs, Dell Rapids scored seven more runs.  Ruesink scored on an error, Jaton had an RBI single, Boechler scored on a wild pitch, Sutton Williams had a two-run single, and Brayden Pankonen drove home the final two runs on a triple.

Dell Rapids scored eight unanswered runs for an 8-1 win over Baltic in the second game of the night.

Mathis had a double and two RBIs.  Pankonen and Jaton each had a single and an RBI.  Jack Henry and Williams each had a single.  Boechler also had an RBI.  Tjaden pitched seven innings allowing one earned run on three hits and a walk while striking out 11 batters.

Dell Rapids ends the regular season with a 13-2 record.  They will host a super regional on Monday, May 23rd and Tuesday, May 24th.  Dell Rapids will play McCook Central at 5:30 p.m.  Mt Vernon-Plankinton/Corsica-Stickney will play Lennox at approximately 7:30 p.m.  The winner of both games will play at 7:00 p.m. on Tuesday with the winner of the night advancing to the state tournament Monday, May 30th and Tuesday, May 31st in Sioux Falls.

All three games will be broadcast on Big Sioux Media Sports Network.

The Dell Rapids Quarrier girls golf team traveled to Vermillion for the Vermillion Invite on Monday, May 16th.  Dell Rapids finished ninth as a team with a score of 404.

Dell Rapids will be in Sisseton on Thursday, May 19th.

Aiden Boechler tore up the base paths for Dell Rapids on Tuesday, May 17th.  Boechler hit three triples in the game and drove home six runs in an 18-4 win over Tri-Valley at Ronken Field in Sioux Falls. 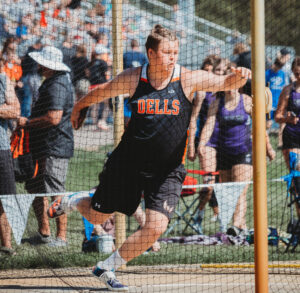 The Dell Rapids Quarrier track teams participated in the Dak-12 Conference meet on Monday, May 16th.  The boys team finished ninth with a total of 34 points.  The girls team finished 10th with 33 points.

Gunnar Chamley took the conference title in the discus.  Jade Anstine placed fourth in the 200m dash and fifth in the 100m dash.  The 4x200m relay team of Ian Mason, Owen Nelson, Chase Jones, and Anstine also had a fifth place finish.