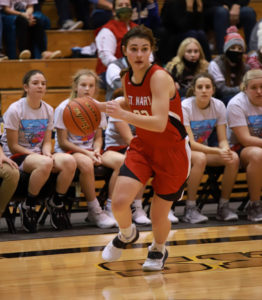 The Dell Rapids St Mary Cardinal and Dell Rapids Quarrier girls basketball team met at the Entringer Classic in Colman on Saturday, December 19th.  This was the second time the two schools competed against one another this sports season.  The schools played one another in volleyball earlier this year with the Cardinals getting the victory in that contest.  Just like the volleyball match this year, the basketball match-up was a hard-fought, close battle bringing the community together in excitement.

Both teams held small leads in the opening quarter of the game.  Dell Rapids held a 7-4 lead before St Mary went on an 8-2 run to end the quarter.  The Cardinals lead 12-9 after the first quarter.  St Mary was able to grow the lead to eight points by halftime at 24-16. 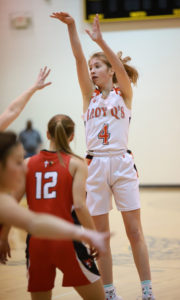 St Mary was able to, again, extend the lead throughout the third quarter.  The Cardinals outscored Dell Rapids 13-10 for a 37-26 lead heading into the fourth quarter.  The Quarriers started to make a run in the fourth quarter.  They started the quarter on a 7-2 run to cut the lead down to six at 39-33.  Dell Rapids got the lead down to two points, 43-41, after a Jayme Schmidt three-point basket with 1:47 to play.  The Cardinals were able to make their free-throws down the stretch, scoring seven straight points, to extend the lead to 50-41.  The Quarriers made two free-throws at the end of the game, but the Cardinals took the win 50-43.