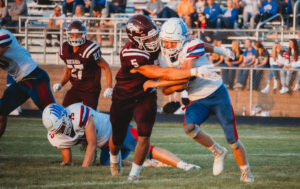 The Tri-Valley Mustangs had their second straight home game on Friday, August 26th.  The Mustangs welcomed the Parker Pheasants to Tri-Valley High School and then sent them home with a 21-0 loss.

After a scoreless first quarter, Tri-Valley got on the board in the second quarter.  Eli McFarland had a one-yard touchdown on a quarterback sneak.  Hayden Hastings scored the two-point conversion after a defensive penalty on the extra point attempt.  That was the only score in the first half, and Tri-Valley led 8-0 at halftime.

The third quarter was scoreless again, and the Mustangs continued to lead 8-0 heading into the fourth quarter.  The Mustang defense played strong all game long and came up big in the final quarter.  Lawson Loiseau got an interception in the quarter, which lead to a score.  After the interception, Hastings scored on a 14-yard touchdown run to put the Mustangs ahead 15-0 after the extra point. On the very next play after the kickoff, Brendan Newman had a 37-yard interception returned for a touchdown for a 21-0 lead.

Carter Sorenson had 10 carries for 64 yards.  McFarland and Hastings each had a rushing touchdown.  Austin McNulty had three catches for 11 yards.  Mason Hendrixson led the team in tackles.

The Mustangs (1-1) will travel to Custer on Friday, September 2nd.  Kickoff will be at 6:00 p.m. central time.  The game will not be on Big Sioux Media, but a link will be provided for the Custer live stream.

**Photos taken and used with permission by Sara Stadem**