The Tri-Valley Mustang girls and boys basketball teams had four players honor with Dak-12 All-Conference selections for the 2021-2022 season.

The Tri-Valley Mustangs and West Central Trojans met in a SoDak 16 qualifying game for the second year in a row on Thursday, February 24th.  Last season saw the Mustangs advance to the SoDak 16, but this year, West Central will be advancing after a 68-39 win at Harrisburg High School.

The atmosphere was electric, and the two teams put on a show in the first quarter.  After an early run by the Trojans, the Mustangs get settled into their offense.  Trailing 13-12, Tri-Valley went on an 8-0 run to finish the quarter capped off by a blocked shot by Paige Jewett and a half-court buzzer-beater by Lauren Grinde.  The Mustangs led 20-13 after the first quarter.

Tri-Valley’s season ends with an overall record of 12-10.  West Central (20-2) will advance to the SoDak 16 which will be held on Thursday, March 3rd. 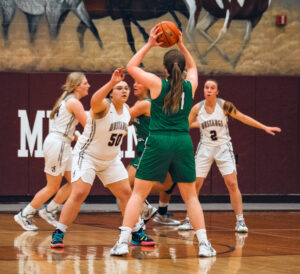 The #4 seed Tri-Vally Mustangs got a come-from-behind win in the opening round of the Region 3A tournament at home on Tuesday, February 22nd.  The McCook Central/Montrose Fighting Cougars led for a lot of the game, but the Mustangs got the win 55-52 to advance to the next round.

The Cougars started the game on an 8-0 run in the first minute and a half.  The Mustangs responded with a 9-2 run and trailed 10-9 with 1:15 to play in the opening quarter.  The Cougars got the final four points of the quarter and lead 14-9 at the break.  McCook Central/Montrose led 25-17 late in the second quarter, but the Mustangs scored the final six points, including a buzzer-beater by Paige Jewett to cut the lead to 25-23 at halftime.

The run continued for Tri-Valley into the third quarter.  They scored the first four points to lead 27-25 with 6:45 to play in the quarter.  The Cougars, however, went on a 5-0 run in 35 seconds to regain the lead 30-27.  The two teams battled back-and-forth the remainder of the quarter, and the Cougars led 37-35 going into the fourth quarter.

The fourth quarter was full of excitement.  Lauren Grinde made a three pointer with 6:00 to go in the game to give Tri-Valley a 40-39 lead.  For the next five minutes, the two teams traded baskets and the game went back and forth.  Jewett made two free throws with :33 on the clock to give the Mustangs a 51-47 lead.  The lead remained four points until a McCook Central/Montrose made a three point shot with :06 to make the score 53-52.  Grinde made two free throws with :02 to go to seal the victory for Tri-Valley.

Tri-Valley will get to play West Central in a SoDak 16 Qualifying game on Thursday, February 24th at 6:30 p.m. at Harrisburg High School.

The Tri-Valley Mustang girls didn’t feel the love from the hoop against the McCook Cental/Montrose Fighting Cougars on Monday, February 14th.  The Mustangs shot just 25% (15-61) from the field and 20% (4-20) from three-point area in a 42-49 loss in their final regular season game.

The Mustangs got within a point in the third quarter, 28-27, but the Cougars ended the quarter on a 7-0 run for a 35-27 lead going into the fourth quarter.  Tri-Valley pulled within two points, 39-37, with 3:00 to play and had multiple chances to tie the game, but couldn’t get the shots to fall.  The Mustangs did get within a point, 40-39, after two free throws by Lauren Grinde with 1:35 to go, but the Cougars scored their final nine points from the free-throw line to hang on for the win.

Tri-Valley’s regular season ends with an 11-9 record.  The Mustangs will begin Region 3A play on Tuesday, February 22nd.

The Tri-Valley Mustang girls have won their last two games.  The Mustangs traveled to Lennox to play the Orioles on Thursday, February 10th and came home with a 49-47 victory.  Tri-Valley then hosted the Milbank Bulldogs on Saturday, February 12th, winning 46-36.

Ava Pearson grabbed an offensive rebound and hit the game-winning put back with :08 to go to give the Mustangs a 49-47 win in a back and forth game.  The two teams battled all game long, trading leads throughout the game.

Tri-Valley (11-8) will wrap their regular season on the road at McCook Central/Montrose on Monday, February 14th.

The Tri-Valley Mustangs were only down seven to the Sioux Falls Christian Changers at the end of the first quarter, 21-14, on Tuesday, February 8th.  The Chargers’ aggressive defense, however, held Tri-Valley to just 25 points over the remaining three quarters in a 71-39 win.

The Mustangs were held to just seven points in the second quarter, and they trailed 38-21 at halftime.  Tri-Valley got another 14 points in the third quarter, but the Charger offense was able to score 21 points as they extended their lead to 59-35.  The Chargers outscored Tri-Valley 12-4 in the final quarter.

The Tri-Valley Mustang girls traveled to Madison for the Dak-12/NEC Clash on Saturday, February 5th.  The Mustangs played the Clark/Willow Lake Cyclones and returned home with a 65-50 win.

The two teams ended the first quarter tied 11-11, and from there, the Mustangs slowly pulled away from the Cyclones.  Tri-Valley ended the first half with a 31-22 lead.  The lead grew to 12 points by the end of the third quarter, 48-36.  The Mustangs also outscored the Cyclones 17-14 in the final quarter for the win.

Lauren Grinde had 20 points to lead the Mustang scoring attack.  Ava Pearson had 17 points, and Paige Jewett finished with 13 points in the game.

Tri-Valley (9-7) will host the Sioux Falls Christian Chargers in a big Region 3A match-up on Tuesday, February 8th.

The Tri-Valley Mustang girls used a big second half to help them to a 63-46 road win over the Dell Rapids Quarriers on Thursday, February 3rd.

The first half featured a few runs by both teams. After the Mustangs scored the first four points, Dell Rapids went on an 11-0 run and led 11-4 with 2:20 to play in the first quarter. Tri-Valley responded with a 10-0 to finish the quarter for a 14-11 lead. The Quarriers had another run in them in the second quarter. They outscored Tri-Valley 14-6 for a 25-20 halftime lead.

Dell Rapids still held a five point lead, 34-29, with 4:40 to play in the third quarter. That’s when the Mustangs went on a big roll. The Mustangs pulled within three points, 36-33, with 3:18 left in the quarter and then finished with a 10-0 run for a 43-36 lead heading into the fourth quarter. Dell Rapids scored the first four points of the fourth quarter to cut the lead to three points, 43-40, with 5:45 to go in the game.  The Mustangs held the Quarriers to just six points the rest of the game while scoring twenty themselves.

The last time the Tri-Valley Mustangs and West Central Trojan girls teams met was at the Region 3A tournament last year.  The Mustangs upset the Trojans to advance to the SoDak 16 in that game.  On Tuesday, February 1st, the Mustangs hosted the Trojans in a packed gymnasium. 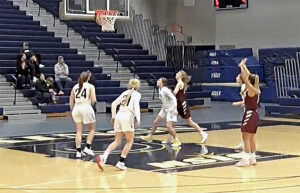 Paige Jewett made her 1,000th point of her career after two made free throws with 4:35 to go in a win over the Colman-Egan Hawks at the Sacred Hoops/First National Bank Girls Classic held at the Elmen Center on Saturday, January 29th.  The Mustangs won 63-55.

The Mustang offense got rolling in the second half.  They outscored the Hawks 15-4 for a 34-27 lead with 3:35 to go in the third quarter.  Tri-Valley continued to lead by seven at the end of the quarter, 42-35.  The Mustangs continued to hold about a seven point lead through the first half of the fourth quarter.  Jewett’s two free throws for her 1,000th point put Tri-Valley ahead 51-42.  Colman-Egan could only get as close as six points, 61-55, with :15 to play in the game.

Jewett’s older brother, Noah, also made his 1,000th point on a free throw at the Elmen Center.

The Mustangs (7-6) have won three in a row.  They will host West Central on Tuesday, February 1st.