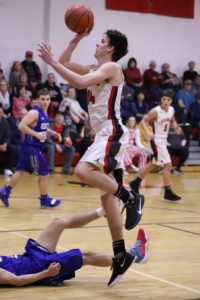 The Dell Rapids St Mary Cardinal boys basketball team ended a two-game skid with a win over the Elkton-Lake Benton Elks on Monday, February 17th at home.  The Cardinals earned a hard-fought 72-60.

The game was close through three quarters before the Cardinals pulled away late in the game.  St Mary started with a 7-2 lead with 5:20 to play in the first quarter.  The Elks closed out the quarter on a 17-9 run for a 19-16 lead by the end of the quarter.  Elkton-Lake Benton kept that three point lead heading into halftime at 35-32.

The Cardinals were able to regain the lead in the third quarter as they outscored the Elks 19-14 to lead 51-49 heading into the fourth quarter.  St Mary was then able to pull away by holding the Elks to just nine fourth-quarter points.

The Cardinals (13-4) will travel to Howard on Thursday, February 20th for a boys and girls double-header.  Both games can be seen on Big Sioux Media. 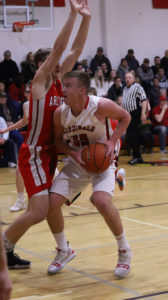 The Dell Rapids St Mary Cardinal boys basketball team took a six-game winning streak into a rematch with the Arlington Cardinals on Thursday, February 13th.  Arlington avenged a loss to St Mary earlier in the season with a 69-59 win ending the winning streak for St Mary.

The game went back and forth through the first three quarters.  St Mary struck first hitting the first two three-point shots of the game for an early lead.  They remained in front holding a 14-9 lead before Arlington ended the quarter on an 8-0 run to lead 17-14 after the first quarter.  Arlington continued the run by scoring the first two points of the second quarter to extend their lead to 21-14.  St Mary then clamped down on defense and held Arlington to just eight more second quarter points while the offense put up 19 to take a 33-29 lead at halftime.

A quick start led the Dell Rapids St Mary Cardinal boys basketball team to a 71-40 win over the Estelline/Hendrick Redhawks on Monday, January 6th in Estelline.

The Cardinals led from start to finish as they got out to a nearly 20-point lead by the end of the first quarter.  St Mary led 26-8 after the first quarter, and then grew that lead to 45-20 at halftime.  The lead grew to over 30 points in the second half as the Cardinals cruised to their sixth victory of the season.

St Mary (6-1) will host the De Smet Bulldogs in a battle of top teams in Class B boys basketball in a girls and boys double-header on Friday, January 10th.  The game can be seen on Big Sioux Media.

The Baltic Bulldogs used a 15-2 fourth quarter to pull away from the Dell Rapids St Mary Cardinals for a 54-28 win on Friday, February 19th, in Baltic.  Baltic led by six points 13-7 at the end of the first quarter.  The lead grew to eight points at 23-15 by halftime.  The Bulldogs pushed their lead to 39-26 by the end of the third quarter before pulling away in the fourth.

St Mary (1-18) will wrap up their regular season at home on Monday, February 22nd, against Chester.  The game can be seen on Big Sioux Media.