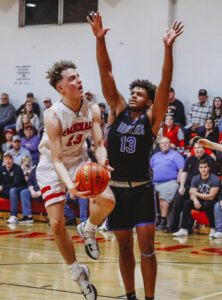 In a hot, packed gym, the Cardinals got out to a fast start.  St Mary led 12-2 with 2:15 to play in the opening quarter.  The Cardinals finished the first quarter with a 14-7 lead.  Things then got quiet for the St Mary offense in the middle two quarters.  The Huskies held St Mary to just four points in the second quarter, which allowed them to build a 24-18 halftime lead.

The third quarter was a defensive battle.  The two teams combined for just 17 total points.  Bridgewater-Emery still held a 32-27 lead going into the fourth quarter.  The Huskies took advantage of 23 trips to the free-throw line in the fourth quarter, converting on 19 of them.  The difference at the free-throw line proved to be the biggest factor in the game as the Huskies took the win.

St Mary’s season ends with an overall record of 15-6.