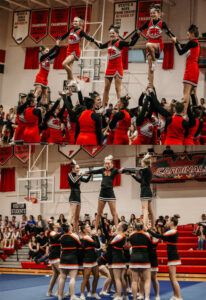 The Cardinals finished in a tie with Deubrook at 209 points.  Deubrook officially placed fourth, and the Cardinals were fifth.  The tie-breaker went to Deubrook because the Cardinals had more deductions with their final score.  The Quarriers placed eighth with 198 points.  Sioux Valley won their 15th straight cheer title with 283.5 points.  Dakota Valley was second with 214 points, and Winner Area was third with 212 points.

Courtney Brown was named an All-State selection at the competition.

The Quarriers finished with 147.5 points.  Bon Homme won the event with 163.5 points.  Wager was second with 162 points.  Dakota Valley placed third with 160.5 points.  Platte-Geddes/Dakota Christian was fourth with 155.5 points.

Dell Rapids will be at the Bon Homme Invite on Monday, October 18th.

The Dell Rapids Quarrier competitive cheer team competed at the Brandon Valley Invite on Tuesday, October 5th.  Nineteen teams competed in the invite, six of those were Class A teams.

Dell Rapids finished 11th overall with a total score of 180.5.  That score was third among the Class A teams.  Sioux Valley finished fourth overall and first out of the A teams with 262.5 points.  Platte-Geddes finished just ahead of Dell Rapids with 184 points.  Bon Homme had 173 points, Parkston 172 points, and Dakota Valley finished with 164 points.

O’Gorman was first overall with 268 points.  Sioux Falls Roosevelt had 265.5 points, and Harrisburg had 263 points.

Dell Rapids will travel to Platte on Saturday, October 16th for their next meet.

Dell Rapids finished second with a total of 124.5 points.  Sioux Valley placed first with 181 points.  Deubrook was third just a half point behind Dell Rapids with 124 points.  Brookings cheer team placed fourth followed by Redfield and then Arlington-Lake Preston.

The Quarriers will be at the O’Gorman Invite at O’Gorman High School on Tuesday, September 28th for their next competition. 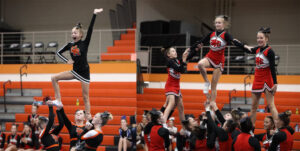 Dell Rapids held their Dell Rapids Competitive Cheer Invite on Tuesday, September 7th.  Eleven teams were initially scheduled to perform, but four of them had to miss.  The other six teams that participated were Dakota Valley, Sioux Valley, Elkton-Lake Benton, Platte/Geddes/AC/DC, Deubrook Area, and Dell Rapids St Mary.  Each team performed just one time during the night.

The two Dell Rapids competitive cheer teams finished in the top two spots of the Dell Rapids St Mary Cheer Invite on Monday, August 30th.  This was the first event for both teams.  Parkston, Arlington/Lake Preston, and Elkton-Lake Benton were the other three teams that competed in the competition.

The Cardinals finished first with a total score of 134.25 points.  The Quarriers placed second with 117.75 points.  Arlington/Lake Preston had 116.75 points.  Elkton-Lake Benton had 108 points, and Parkston finished with 105.75 points. 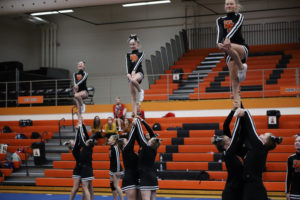 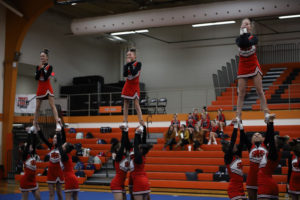 The Dell Rapids Quarier competitive cheer team performed in their seventh competition of the season on Tuesday, September 29th.  Dell Rapids was in Sioux Falls for the O’Gorman Invite.  Eleven teams between Class A and AA took part in the event.

The Quarriers placed seventh overall with a score of 188.5 points.  That point total was second among the Class A schools.  Sioux Falls Roosevelt was first with a score of 289.5.  O’Gorman placed second with 273 points.  Harrisburg was third at 271 points, and Sioux Valley was fourth with 267 points.  Deubrook and Dakota Valley were the other two Class A teams at the event, and they finished eighth and ninth respectively.

Dell Rapids will be in Brandon for the Brandon Valley Invite on Tuesday, October 6th.

The Dell Rapids Quarrier competitive cheer team placed second at the Sioux Valley Invite on Thursday, September 25th, in Volga.  There were a total of seven teams that took part in the event.

Sioux Valley placed first with a total score of 174.5.  Dell Rapids was second with 129.0 points.  Deubrook was third with 126.5 points.  Redfield was fourth at 104.0 points.  Arlington-Lake Preston had a fifth place finish with 88.5 points.  Northwestern was sixth with 84.5 points, and Faulkton Area finished with 78 points.

Dell Rapids will be at the O’Gorman Invite on Tuesday, September 29th, for their next competition.