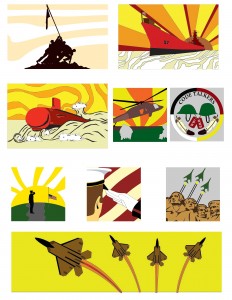 A Dell Rapids graduate had a significant role in the new Corn Palace mural designs.  Chloe Solberg, a sophomore at Dakota Wesleyan University, was part of a team from DWU’s Digital Media and Design department that helped design nine different murals for the Corn Palace in Mitchell.  The new murals will be made out of corn and grain and will be installed this summer and fall.  The designs were announced about a month ago.

“I really loved being a part of the work study because he (Herges) put me right into Graphic Design projects that really exposed me to experiences I needed as a freshman to set myself apart from my peers,” said Solberg.

The other big project that Professor Herges assigned to Solberg was working on the Corn Palace murals.  Solberg helped create three of the designs on the computer, Mt Rushmore, Iwo Jima, and Saluting Half-staff with the Sunset.  Along with digitally working on those designs, Solberg also helped to other students, Isabelle Barraza and Liam LaFrance, by applying the big 10-foot by 30-foot designs on the mural paper.

“I helped grid out the designs and draw out some of the designs.  IT was quite a big project, and it took a few months, but in the end when we were all done, we were so satisfied with our outcome.  I hope our designs can hit home with our veterans, because we were very honored to take on this project to represent our country and veterans.  I cannot wait to see them up outside the Corn Palace, and I hope the Dell Rapids community can take a drive to Mitchell to see my designs!” Solberg said.

Solberg was also involved in other campus activities.  She’s involved as a Student Ambassador and campus ministries such as Monday Night Freshmen Ministry, Thursday Campus Chapel, and Worship Under the Stars.

Heinemann is in his final season for the Quarrier track team and was a part of the Quarrier football team this fall.

Senior Jeffrey Schuch became the fifth Quarrier athlete to sign a letter of intent to play collegiate sports in a week when he signed with Dakota Wesleyan University on Thursday, November 16th.  Schuch will be joining the Tiger men’s basketball team next fall in Mitchell, SD.

Schuch was also a member of the Quarrier football team this past fall. 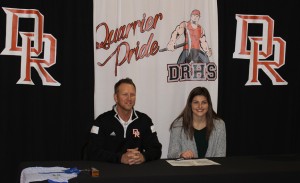 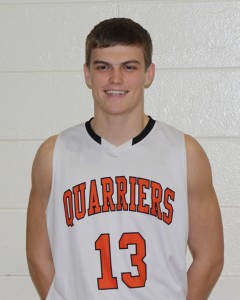 Another Dell Rapids graduate will be heading to Dakota Wesleyan University to play basketball for the Tigers.  Mason Peter has signed to play for the Tigers next season.

In their younger years you could hear an echo of a basketball dribbling in the gym, the clang of a basketball hitting iron, and a swish of a made basket—all seemed like a common occurrence with these two Dell Rapids Quarrier teammates.  Zane Schumaker (Mount Mary—freshman guard) and Ty Hoglund (Dakota Wesleyan—freshman guard) were in third/fourth grade when they began playing this game together as teammates; however, on November 22, 2016 in Yankton, SD, something changed.

They were together on the floor again, but this time playing against each other.  As Hoglund would say following the game, “that just felt weird”.   It was also a bit strange watching from the stands cheering for both, but rooting for one.   I’m sure this sequence has occurred several times within the state, perhaps even here in Dell Rapids—recent memory includes two brothers from Dells playing against each other.

Memories returned of these two hitting three point shots as young grade school kids, barely with the strength to get the ball to the rim, but with all the confidence of a veteran ball player.  It didn’t take long to know they had something special.  At a young age, their uncontrolled speed and over abundance of energy are now a bit more enhanced, controlled, and times with pin point accuracy.  Their time in the gym, hours of practice, to push their passion for the game only continues to grow, and oh how it shows with the improvement and enhancement of their individual and team skills.  Even as college freshman both are showing signs of leadership and gamesmanship on veteran teams.  They are no longer boys.  These two former grade school kids, who possessed tons of energy and love of basketball, are now grown men still possessing the same energy and love of the game.

It was a bit strange not seeing them wearing Quarrier orange and black, instead sporting two different shades of blue with a splash of white.  The names have changed from Schmidt, Hammer, and Karst to names like Thok, Martin, Tellas, and Spicer.  The chemistry built with years of playing with their old teammates, now needs to be quickly developed with their new teammates for a future of success on the court.  Their teams may be heading in different directions, as Dakota Wesleyan pulled away from Mount Marty to capture the win this night, but both these former Quarriers again showed their skill and ability to their new fans of Lancers and Tigers.

The Lancer and Tiger fans will get to know and enjoy watching these two play for the next four years, as we Quarrier fans have been doing for many years.  Oh yes, there were fans from Dell Rapids in the stands watching this match-up, perhaps bringing back memories of state tournament runs, 25 foot bombs, awesome passes, last second shots, and a love for the game attitude.  This won’t be the last time they will be on the floor together.  They could possibly see each other another seven times, since both schools play in the very talented GPAC conference, and are scheduled to play twice a year, if they both decide to continue to play the game—I have a hunch they will.   They will move on to do great things in their life and enjoy life as friends on and off the court, and when they get together, not only will they visit about high school experiences, but now they can throw it a bit about college.

As I watched them interact following the game, talking and laughing about the game and their current teammates, but still holding on to that connection from the past. 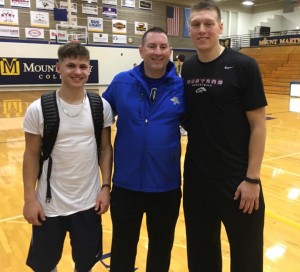 Schumaker had the first opportunity to experience playing against a former Quarrier when Mount Marty faced Morningside on November 16, 2016 and former Quarrier Bryce Koch.  Hoglund will get the same opportunity when Dakota Wesleyan faces Morningside on November 30, 2016.   All in all, I can say it was a lot of fun to watch these two play again, even if they weren’t on the same team.  They are representing Quarrier basketball and coach Fersdahl quite well in their new roles and teams.

Zane and Ty will face off again on February 1, 2017, as Dakota Wesleyan hosts Mount Marty at the Corn Palace in Mitchell, SD at 8 p.m. 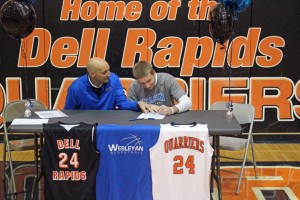 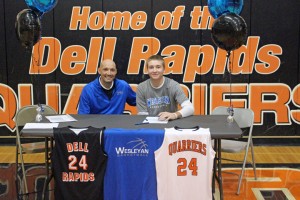 The Dell Rapids Quarriers open up their season on Friday, December 11th, in Hartford against the West Central Trojans. 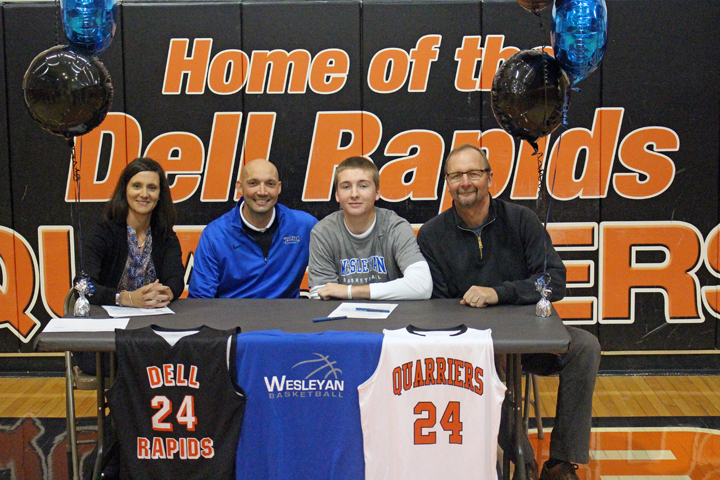 Jase Nelson, senior at Dell Rapids High School, signed a letter of intent to play football at Dakota Wesleyan University in Mitchell.  Nelson finished his senior year of Quarrier football completing 57 of 107 passes for 1,118 total yards.  He threw 15 touchdowns and only seven interceptions.  He also ran the ball 26 times for 74 yards and a touchdown.

One of Nelson’s best games came in the semi-finals of the playoffs where he went 7-11 passing for 125 yards and two touchdowns against West Central to send the Quarriers to the Dome on their way to the 11A Championship.

Nelson will now suit up as a member of the Tiger football team.

As reported in the Dakota Wesleyan University Tiger Athletics newsletter, Devon Weber from Dell Rapids has signed a National Letter of Intent to play golf for the DWU Tigers next year. The men’s golf coach Adam Anderson was quoted in the publication as saying, “Devon is an outstanding person who is very well-rounded.  He will be a great addition not only to our team but for the campus community at Wesleyan.”

Devon, a senior, helped the Quarriers in winning the South Dakota Class A State Title for a second consecutive season this fall. Devon finished ninth on the 2014 individual leaderboard at the state tournament. He had a stroke average of 78 as a senior to follow an average of 82 his junior season.

Anderson also stated, “He has shown success at the high school level and his determination to keep improving himself makes Devon the kind of player we want in our program. I am happy he has chosen DWU.”

He is the son of Dan and Nichole Weber.

The spring semester dean’s list at Dakota Wesleyan University includes Lindsay Merry and Tanner Munk from Dell Rapids.  To qualify for the dean’s list, a student must have a semester grade point average of at least 3.5 on a four-point scale. Students also have to complete at least 12 hours of academic work during the semester.