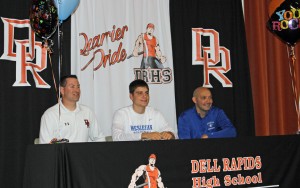 Senior Jeffrey Schuch became the fifth Quarrier athlete to sign a letter of intent to play collegiate sports in a week when he signed with Dakota Wesleyan University on Thursday, November 16th.  Schuch will be joining the Tiger men’s basketball team next fall in Mitchell, SD.

Schuch was also a member of the Quarrier football team this past fall.