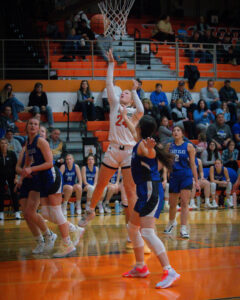 The Dell Rapids Quarrier girls took a home loss to the Elkton-Lake Benton Elks on Tuesday, January 24th.  The Elks won the game 55-39.

Elkton-Lake Benton had a lead for most of the game.  They had a 19-9 lead at the end of the first quarter.  Dell Rapids kept pace with the Elks in the second quarter, but the Elks held a 29-17 lead at halftime.  The big blow for the Quarriers came in the third quarter then the Elks outscored them 20-4.  Elkton-Lake Benton led 49-21 going into the fourth quarter.