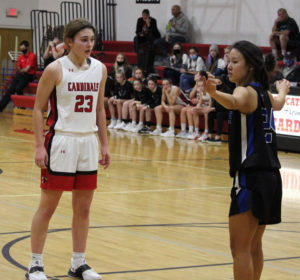 The girls found themselves trailing 3-0 in the opening moments of the game, but that was the only lead the Golden Eagles would have.  St Mary grabbed control of the game midway through the first quarter as they went ahead 15-9 by the quarter break.  The Cardinals pushed the lead to 10 points by halftime at 28-18.

The defense for the Cardinals was the difference in the game as they held Mitchell Christian to single digit points in each of the four quarters.  The Golden Eagles, again, only got nine points in the third quarter, and then St Mary held them to just five points in the fourth quarter for the season-opening win, 50-32.

Ella Heinitz finished the night with a team-high 15 points and four steals.  Ella Griffin added 12 points and eight rebounds.  Courtney Brown nearly had a double-double with eight points and 10 rebounds along with three steals.  Addyson Gilbert and Brianna Griffin both finished with five points each. 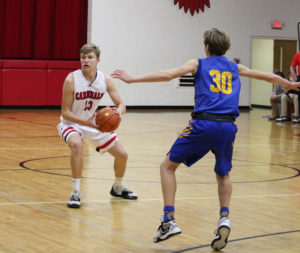 The Cardinal boys went on a 34-point run to open the game.  St Mary held Mitchell Christian scoreless until near the midway point of the second quarter.  The opening run was all St Mary would need as they would cruise to a 67-26 season-opening victory.