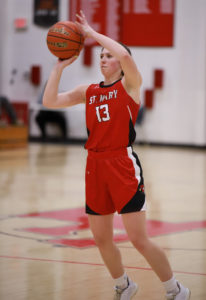 Both the Dell Rapids St Mary Cardinal girls and boys basketball teams posted big wins on the road in Chester on Monday, December 28th.  The girls team won 53-37 over the Flyers, while the boys team had a 70-35 victory.

After a quick 3-0 start by Chester to start the game, the Cardinals controlled every part of the game the rest of the way.  St Mary outscored Chester 23-5 for a 23-8 lead by the end of the first quarter.  The lead grew to 20 points by halftime at 33-13.  St Mary led 44-23 after three quarters. 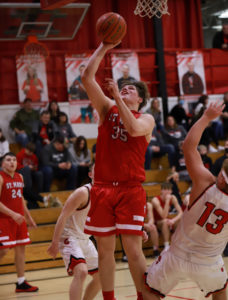 The Cardinal boys team also took control of their game early in the first quarter.  The score was tied 6-6, and St Mary then went on a 15-1 run to close out the first quarter leading 21-7.  Chester closed the gap by one at 30-17 at halftime.  The Cardinals then outscored Chester 25-10 in the third quarter to lead 55-27 heading into the final quarter.

The Cardinal boys (3-1) will play the Dell Rapids Quarriers at the Entringer Classic on Thursday, December 31st at 5:00 p.m. in Colman.  The Cardinal girls (4-1) will travel to Garretson on Tuesday, January 5th.