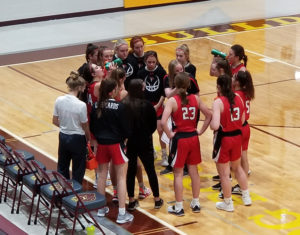 The Dell Rapids St Mary Cardinal girls and boys basketball teams played a double-header in De Smet against the Bulldogs on Monday, December 21st.  The girls team took home a 48-34 win.  The boys team suffered their first loss of the season, 33-69.

The Cardinal girls needed a quarter to get going, but once they did, they locked down the Bulldogs.   De Smet held a nine-point lead in the first quarter and led 16-7 heading into the second quarter.  That’s when the St Mary Cardinal defense took control.  The Cardinals held De Smet to just two points in the second quarter, while the offense scored 19, and St Mary led 28-18 at halftime.

St Mary’s defense continued to give De Smet problems in the second half.  The Cardinals outscored the Bulldogs 10-6 in the third quarter, and then built a 19-point lead in the fourth quarter for their third win of the season. 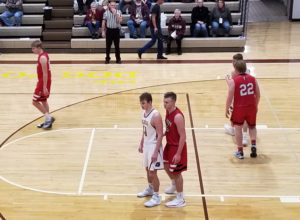 The St Mary boys team ran into a hot-shooting De Smet team on a night where the shots were not falling for themselves.  The Cardinals got down big in the first quarter and were not able to recover.  De Smet outscored St Mary in every quarter.  The Bulldogs led 28-9 after the first quarter, and the lead grew to 47-17 by halftime.  The Bulldogs then outscored St Mary 22-16 in the second half.

Both of the Cardinal teams will be in Chester on Monday, December 28th, for a double-header with the Flyers.