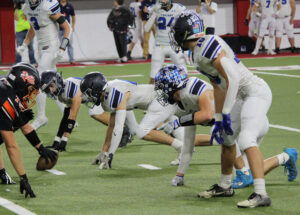 The West Central Trojans finished the 2022 football season at the 11A Runner-up after suffering a loss to the Dell Rapids Quarriers in the title game on Friday, November 11th in Vermillion.  Dell Rapids built an 18-0 lead on their way to a 24-7 victory.

The Trojans appeared to have grabbed momentum early in the game after Dalton Mulder intercepted a pass on the Quarriers’ opening drive of the game.  West Central, however, could not capitalize on the turnover.  And unfortunately for the Trojans, the momentum shifted back to Dell Rapids after a low snap on a punt attempt led to a turnover on downs.  Dell Rapids scored on a 21-yard run with 7:45 to go in the first quarter.

West Central again made a big play late in the first quarter.  Crew Heier blocked a punt, and the Trojans recovered the ball on the Dell Rapids 46 yard line.  The first quarter came to an end with Dell Rapids leading 6-0 before the end of the Trojans’ next drive.  On the first play of the second quarter, West Central was faced with a fourth down on the Dell Rapids 10-yard line, but Justin Zirpel’s pass to Owen Heath was caught out of bounds, and the Trojans turned the ball over on downs.  Dell Rapids was score again with 3:25 in the half on a 21-yard run, and the Quarriers led 12-0 at halftime.

Neither team was able to get a score in the third quarter.  The Quarriers added to their lead on a six-yard touchdown run, and with 6:42 to play in the game, Dell Rapids led 18-0.  The Trojans put together a quick score on their next drive.  Zirpel completed an 11-yard touchdown pass to Aiden Bartmann.  Cambell Fischer added the extra point with 5:01 left to make the score 18-7.  The Trojans attempted an onside kick, but the attempt failed, and Dell Rapids took possession.  The Quarriers scored one more time on a two-yard run with 1:42 to play to make the score 24-7.

West Central’s offense was held to just 97 total yards, 63 passing yards and 34 rushing yards.  Zirpel was 7-14 passing for 63 yards and three interceptions.  Xzavian Ferris had a catch for 35 yards.  Layton Johnson had two catches for 21 yards, and Bartmann had a touchdown catch for 11 yards.  Zirpel also had 13 carries for 34 yards.  Jesse Jost had four carries for 12 yards.

The Trojans finished the season with an overall record of 10-2.

Trojans Advance to 11A Title Game