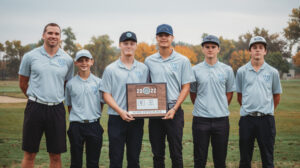 The team finished fifth with an overall score of 646.  Vermillion took the top spot at 614.  Aberdeen Roncalli finished second with a score of 638.  Dakota Valley and Sioux Valley tied for third with scores of 645.