The Garretson Blue Dragon girls soccer team had their season come to an end on the road on Thursday, September 23rd.  The Blue Dragons fell to the Sioux Falls Christian Chargers 2-1.

Neither team was able to get a goal in the first half of play.  The two goals scored by the Chargers in the second half were just enough to get the win and end the season for Garretson.

The Blue Dragons finished their season with a 2-10-1 record and eighth in the Class A seed points.  Only the top six teams qualify for the playoffs.

The Garretson Blue Dragon girls soccer team held their final home match of the 2021 season on Tuesday, September 21st.  The Blue Dragons hosted the Dakota Valley Panthers, and the Panthers won the match, 2-0.

The first goal for the Panthers came late in the first half.  With 3:15 remaining, Dakota Valley got behind the Garretson defense on a break-away and got the goal for a 1-0 lead.  The Panthers scored a second-half goal with 11:07 to play to make the score 2-0.

Garretson currently had a 2-9-1 record and will finish their season on the road at Sioux Falls Christian on Thursday, September 23rd.

The Garretson Blue Dragon girls soccer team had one loss and one draw in their last two matches.

With only two matches left in the season, Garretson currently is in eighth place in the standings.  The top six teams qualify for the state tournament.  Groton is currently in the sixth spot with 39.938 points.  St Thomas More is seventh with 39.667 points, and Garretson has 38.591 points.

The Blue Dragons will have their final home match of the season on Tuesday, September 21st when they host Dakota Valley.  Their final regular season match will be at Sioux Falls Christian on Thursday, September 23rd.

On Saturday, September 11th, Garretson traveled to Dakota Valley.  The Blue Dragons fell to the Panthers by a score of 2-1.  Kylie Christensen scored off of a corner kick by Jenna VanHolland in the game.  VanHolland had five shots on goal.  Christensen had three shots on goal.  Madison Ljunggren had two, and Joely Sterud and Jordyn Williams both had one shot on goal.

“We were aggressive right off the bat and held with them the entire game.  We were able to possess the ball in the midfield and played solid defense,” said head coach Amber Williamson.

The Blue Dragons again took to the road on Tuesday, September 14th.  They traveled to Vermillion and fell to the Tanagers 5-1.  The match was 2-1 at halftime in favor of Vermillion.

“We were on our offensive half possessing the ball for the majority of the game, but could not find the back of the net,” said Williamson.

Cortney Rogich had 10 saves in goal.  The lone goal for Garretson came from Raegen Altman and was assisted by Williams.  Pagie Sterud, J. Sterud, and VanHolland each had two shots on goal.  Ljunggren and Morgan Damman each had a one shot on goal.

Garretson will host West Central on Thursday, September 16th, which will also be parent’s night.

The Garretson Blue Dragon girls soccer team traveled to Hartford to play the #1 ranked West Central Trojans on Tuesday, September 7th.  The Trojans proved their number one ranking with five goals in the first half and three more in the second for an 8-0 win over the Blue Dragons.

Kayla Genzlinger did have 12 saves in goal for Garretson.  Jenna VanHolland had three shots.  Morgan Damman and Joely Sterud each had one shot on goal.

Garretson (2-5-0) will play at Dakota Valley on Saturday, September 11th. 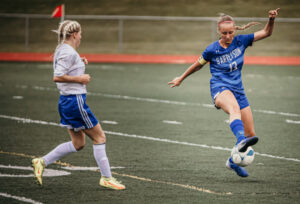 The Garretson Blue Dragon girls soccer team is coming off a 3-7-2 record in the 2020 season, a season that saw the team just miss qualifying for the playoffs.

The 2021 squad has five seniors that will be leading the team, four of them from Dell Rapids.  This year’s seniors are Madison Ljunggren, Tori Lodmell, Paige Sterud, Miriam Pickard, and Oliviyah Thornton.  Head coach Amber Williamson said that her seniors will be surrounded by underclassmen with plenty of varsity experience including juniors Reagan Altman, Morgan Damman, Kayla Genzlinger and Jenna VanHolland.  Williamson also expects Jordyn Williams, Joely Sterud, and Kylie Christensen to be big contributors this season as well.

“Despite our record last year, we were within a goal of turning many of those losses into wins.  This year we are focused on finding more ways to put the ball in the back of the net and coming out on the other side of those close games,” Williamson said.

The Blue Dragons have already had three matches to start the 2021 season.  Garretson hosted Vermillion on Friday, August 13th and fell by a score of 3-0.  Vermillion got a goal in the first half and then added two more in the second half for the win.  The Blue Dragons then made the long trip north to Groton on Saturday, August 14th.  Groton Area got a second-half goal, the only goal of the game, for a 1-0 victory.

Garretson got into the win column on Tuesday, August 17th in a match at Huron.  The Blue Dragons found the back of the net three times in the first half and scored two more times in the second half for a big 5-0 victory over the Huron Tigers.

The Blue Dragons (1-2-0) will travel to Tea to play the Titans on Saturday, August 21st.

The Garretson/Dell Rapids Blue Dragons played their final regular season match of the season on Thursday, September 24th, at home against the Sioux Falls Christian Chargers.  The Blue Dragons ended their season with a win by a score of 3-2.

The Chargers took the lead in the first half and led 1-0 at the break.  Garretson/Dell Rapids tied the match on a corner kick by Paige Sterud.  Sioux Falls Christian regained the lead on a free kick at 2-1.  The Blue Dragons again fought back when Jordan Williams put the ball in the net off a corner kick from Sterud.  Sterud then helped the Blue Dragons take the lead when she made a free kick after a penalty, which was the game-winning goal.

Garretson/Dell Rapids ends their regular season with a ecord of 3-7-2.  They now wait for the rest of the regular season matches to complete to see if they will qualify for the playoffs. 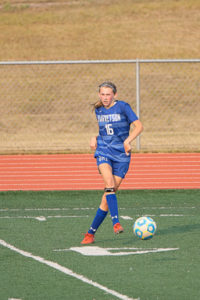 The Garretson Blue Dragons traveled to Groton on Saturday, September 19 to take on Tigers on the soccer field.  Earlier this season, the Lady Blue Dragons tied with the Tigers. This time around, Garretson struggled to find their groove and the back of the net, losing 5-0.

Tuesday, September 22nd, the Blue Dragons hit the road to Dakota Valley. “We were focused and ready to bounce back from Saturday’s disappointing loss,” Coach Amber Williamson said. “The girls came out fired up, possessing the ball, and aggressive.” Garretson fell to Dakota Valley 1-2. 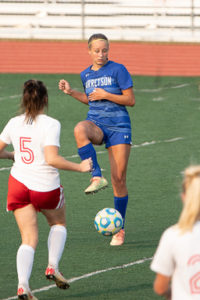 Garretson found themselves down 1-0 at half against the Panthers. Dakota Valley found the net on an indirect kick outside the 18-yard box at the start of the second half. “We fought back, and narrowed the lead to 2-1 after Morgan Damman scored on an assist by Joely Sterud,” Coach Williamson added.

Sterud had five shots on goal. Raegen Altman, Damman, Paige Sterud and Jenna VanHolland each had two shots on goal. Miriam Pickard, as a defender, also added a shot on goal. In goal, Kayla Genzlinger had 14 saves. 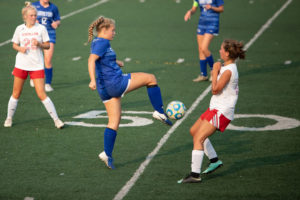 The Garretson Blue Dragons took on the Dakota Valley Panthers on Saturday, September 12th at home. Battling rain throughout the game, the Blue Dragons ended in a tie with the Panthers 2-2.

The Blue Dragons came out strong and scored a goal in the first half by Dell Rapids Joely Sterud. At the end of the first half, the score remained 1-0. In the first part of the second half, Raegen Altman found the back of the net after the Dakota Valley goalie miss handled the ball getting a second goal on the scoreboard for the Blue Dragons.

Kicking off homecoming this week for Garretson, the Vermillion Tanagers came to town on Tuesday, September 15th. The Blue Dragons were looking to bounce back from their loss against #2 rated Vermillion from the first game of the season.

Vermillion was able to score during the first half against Garretson, which ended up being the only goal of the night. The Blue Dragons fell to the Tanagers 0-1.

Garretson will travel to Groton Area on Saturday, September 19th to take on the Tigers with game time scheduled for 1:00pm. Garretson’s current record sits at two wins, five losses and two ties.