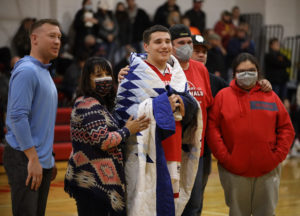 This night belonged to Ashaun Roach-Valandra.  Prior to tip-off against the Howard Tigers, Roach-Valandra was recognized as this year’s Sacred Hoops Kernit Grimshaw Athlete of Character award winner.  In front of a packed gym and family sitting front row, Roach-Valandra had night folks won’t soon forget.

The match-up between the St Mary Cardinals and Howard Tigers on Thursday, February 11th had plenty of hype.  Both teams are atop Region 4B and are two of the top teams in Class B boys basketball.  The game lived up to the hype.

The two teams ended the first quarter tied 12-12.  Howard gained a slight advantage in the second quarter and led 31-25 by halftime.  Both Roach-Valandra and Sam Aslesen of Howard were in double figures at that point in the game.

St Mary opened the second half on an 11-2 run for a 36-33 lead with 4:40 to play in the third quarter.  Howard responded with a quick 4-0 run to go back in front 37-36.  Then St Mary turned the game in their favor.  The Cardinals went on an 8-0 run for a 44-37 lead.  The lead grew to 50-41 by the end of the third quarter.  Howard tried to rally throughout the fourth quarter, but every time the Tigers got within three or four points, the Cardinals had an answer and eventually hung on for a 66-61 victory. 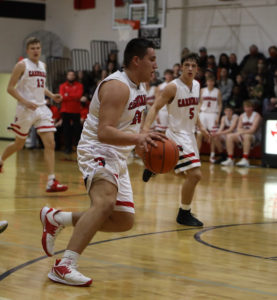 St Mary (14-3) will play Canistota at the DWU Classic in Mitchell on Saturday, February 13th.  Tip-off is 6:00 p.m. and the game can be seen on Big Sioux Media.