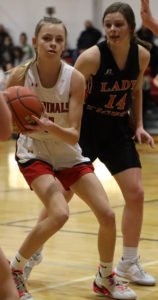 The Howard Tigers outscored the Dell Rapids St Mary Cardinals 35-20 in the second half to get a 54-39 win at St Mary High School on Thursday, February 11th.

Playing in their third game in four days, the Cardinals held strong in the first half.  The two teams were tied 11-11 at the end of the first quarter, and then again 19-19 at halftime.  St Mary was only down one point at 26-25 with 4:15 to play in the third quarter, but Howard then used their size advantage and muscled their way to 36-29 lead heading into the fourth quarter.  St Mary seemed to run out of gas in the fourth quarter as the Tigers took the win.

St Mary (12-5) will host Oldham-Ramona/Rutland on Monday, February 15th.  The game can be seen on Big Sioux Media.