The Dell Rapids Quarriers won their first game on the brand new field turf on Friday, September 9th.  Dell Rapids played their first home game of the season against the Hot Springs Bison.  They built a big first half lead in a 41-21 victory.

Mason Stubbe scored the first touchdown with 8:40 to go in the opening quarter on a 12-yard run.  Stubbe scored again just about three minutes later.  With 5:44 left in the quarter, Stubbe scored on a 25-yard run.  The two-point conversion was good, and Dell Rapids led 14-0.  The Quarrier defense got a score seconds later.  Evan Nelson intercepted a pass and made a big return.  While being tackled he fumbled the ball, but Chase Jones was there to scoop up the ball and take it the last 10 yards into the end zone for a touchdown. 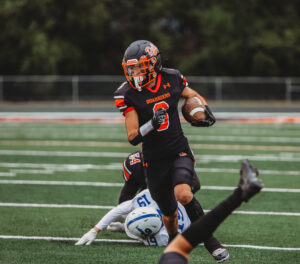 Brayden Pankonen put the Quarriers ahead 28-0 on a one-yard run with 7:30 to play in the second quarter.  Hot Springs got their first score on a 31-yard pass with 5:02 left in the half.  Dell Rapids put an exclamation point on the the first half with two more scores.  Cooper Frost had two touchdown throws.  The first one was a 31-yard pass to Braden Fersdahl with 2:10 left on the clock.  The second pass was a 27-yard touchdown to Stubbe with :11 left in the second quarter.  The Quarriers led 41-7 at halftime.

Neither team got a score in the second half.  The Bison were able to put two scores on the board in the fourth quarter.  The first one was a 24-yard pass with 7:00 left in the game.  The final score was a 27-yard run very late in the game. 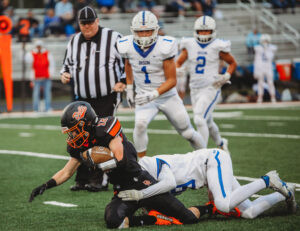 **Photos taken and used with permission by Tammy Chamley**