The Dell Rapids St Mary Cardinals ended their 2020-2021 season on a high note by taking third in the 2021 South Dakota Class B State Tournament on Saturday, March 20th.  The Cardinals defeated the Viborg-Hurley Cougars 76-58. 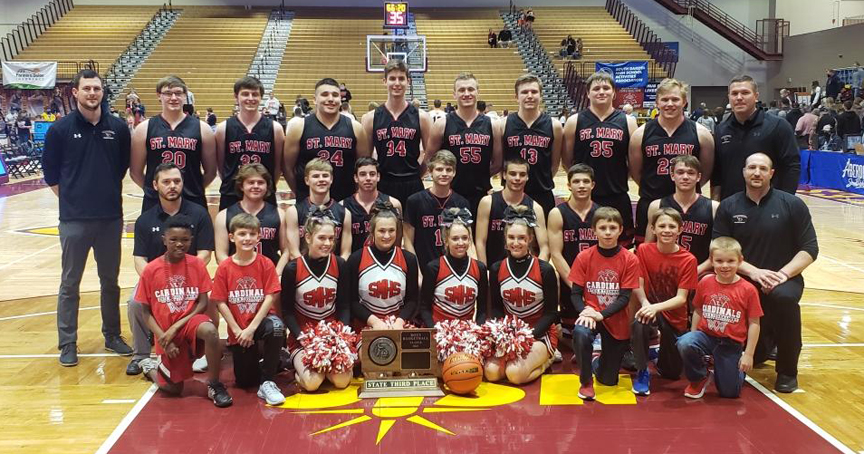 Photo taken and used with permission by Lee Palmer

The two teams put on an offensive show in the first quarter.  They combined for 55 points trading shot for shot the entire quarter.  Neither team had more than a four point lead, and it was the Cardinals that held the 29-26 advantage at the end of the quarter.  St Mary continued the hot shooting in the second quarter.  They built an 11-point lead, 46-35, after a field goal by Connor Libis with 2:45 in the half.  The Cougars, though, finished the half on a 7-0 run to cut the lead to four at 46-42.

Viborg-Hurley scored the first three points of the third quarter and pulled within a point, 46-45.  The Cardinals were able to keep the lead throughout the first half of the third quarter.  The Cougars were within two points, 54-52, after a field goal with 3:29 to go, but the two teams struggled to score the remainder of the quarter.  Libis made two free throws with :27 for the only other two points in the quarter, and St Mary lead 56-52 heading into the fourth.  The St Mary defense locked down the Cougars in the final quarter, holding them to just six points, while the offense scored another 20 points to cruise to the 3rd place win. 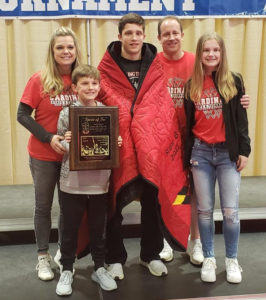 Photo taken and used with permission by Lee Palmer

Libis also earned the big honor of winning this year’s “Spirit of Su” award, which he was awarded at halftime of the championship game.  Libis and Roach-Valandra were named to the All Tournament team.

St Mary finishes their season with a 21-5 overall record.