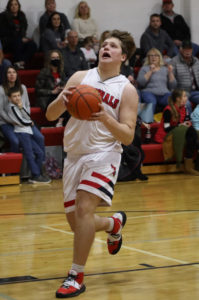 The Dell Rapids St Mary Cardinal boys basketball team bounced back into the win column with a big 85-29 win over the Oldham-Ramona/Rutland Raiders on Saturday, January 16th.  The game got moved to Saturday from Friday due to weather.

St Mary lead from start to finish in the game as they build a 22-6 lead by the end of the first quarter.  The lead grew to 34 points at 48-14 by halftime.  The game was played with a running clock in the second half as the Cardinals outscored the Raiders 37-15 in the second half.

The Cardinals (6-3) will play Colman-Egan in the opening round of the Dakota Valley Conference tournament on Tuesday, January 19th at 7:30 p.m. in Colman.  The game can be seen on Big Sioux Media.