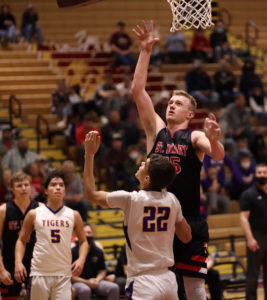 The Dell Rapids St Mary Cardinals took a step closer to their first state title since 2004 after a 75-69 win over the #3 seeded White River Tigers on Thursday, March 18th at the Barnett Center in Aberdeen.

These two teams had seen each other earlier in the year.  The Cardinals and Tigers did battle in the 2nd Annual Sacred Hoops Classic in Mitchell on January 2nd.  The Cardinals also won that game 89-72.

The Cardinals got out to a quick 6-2 lead in the first three minutes of the game.  White River responded with a 5-0 run for a 7-6 lead with 4:36 to play in the opening quarter.  The Cardinal offense then scored 15 more points and led 21-13 at the end of the quarter.  White River kept the deficit within single digits until the 2:17 mark of the second quarter.  The Cardinals were then able to push the lead to 15 points by halftime, 39-24.  That lead was just enough to hold off a second half rally by White River.

The Tigers slowly chipped away at the lead in the third quarter.  They were able to cut it in half by the end of the quarter, and the Cardinals led 47-40 heading into the fourth quarter.  White River got the lead down to four points after a three-pointer by Colbe Scott with 7:24 left in the game.  The Cardinals shut down the rally at that point.  St Mary went on an 8-0 run capped off by a three-point basket by Connor Libis to give the Cardinals a 55-43 lead with 6:31 to play.  The Tigers made one more attempt at a come back.  Joe Sayler cut the Cardinal lead down to six points, 66-60, with 1:30 left in the game, but a three-point basket and two-free throws by Sam Palmer in a span of fifteen seconds sealed the victory for the Cardinals.

The #6-seeded Cardinals will play #7 Aberdeen Christian on Friday, March 19th.  Tip-off is scheduled for 7:45 p.m.