Monday, September 29th, was the first of three battles between the Dell Rapids St Mary Cardinals and Dell Rapids Quarriers this season.  This first match-up was on the volleyball court at Dell Rapids St Mary High School.  The schools came together to provide a fun atmosphere for the teams.

The first set started back-and-forth with neither team getting a lead bigger than two points.  The Quarriers made a run of four straight with the score tied 9-9 to take a 13-9 lead.  The Cardinals were able to tie the set at 16-16 and then took a short 19-18 lead.  Dell Rapids then scored the next seven points for the 25-19 win. 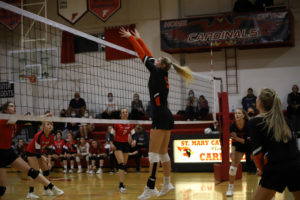 The Cardinals and Quarriers battled back-and-forth again to start the second set.  The two teams were tied 7-7, but this time the Cardinals made the first run outscoring the Quarriers 6-1 for a 13-8 lead.  Dell Rapids chipped away at the lead and tied the set at 16-16.  They then took the lead 19-16.  Dell Rapids continued to lead by three at 21-18, but this time the Cardinals went on the late set run scoring the final seven points for a 25-21 victory to even the match.

After falling behind 3-1 early, St Mary continued to thrive on the momentum from the second set and went on a 7-0 run to lead 8-3.  The Quarriers stopped the run and scored five straight of their own to tie the set at 8-8.  St Mary then went ahead at 16-11 and continued roll winning the third set 25-13. 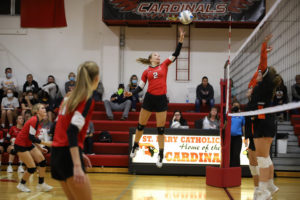 St Mary (6-2) will travel to Baltic on Tuesday, September 29th and then to Lake Preston on Thursday, October 1st.

Dell Rapids (2-11) will host McCook Central/Montrose on Tuesday, September 29th and then travel to Lennox on Thursday, October 1st.