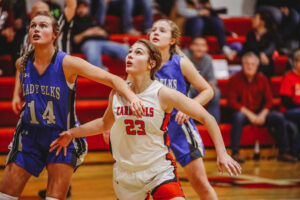 The Dell Rapids St Mary Cardinals held off an Elkton-Lake Benton rally for a 64-57 win at home on Tuesday, January 11th.

The Cardinals built a quick 10-point lead after the first quarter at 19-9.  The lead grew to 34-21 by halftime.  The Elks started making a run in the third quarter.  Elkton-Lake Benton outscored St Mary 21-16 to cut the lead to 50-42 heading into the fourth quarter.  The Cardinals were able to hold off the Elks for the win.

The Cardinals (5-3) will be at Oldham-Ramona/Rutland on Thursday, January 13th.