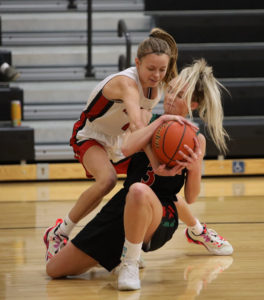 The Dell Rapids St Mary Cardinal girls had to battle hard to get a 54-48 over the Estelline/Hendricks Redhawks in the opening round of the Dakota Valley Conference tournament in Colman on Monday, January 18th.

The Cardinals looked like they might be able to coast into the semifinals after starting the first three and a half minutes of the game on an 11-0 run.  St Mary led 16-4 at the end of the first quarter.  They pushed the lead to 14 points at 20-6 with 4:30 to play in the half, but the Redhawks cut the lead down to 10 points by halftime at 25-15.

Estelline/Hendricks tried to make make runs at the Cardinals in the third quarter, but every time they did, St Mary had an answer.  The Cardinals held a 38-27 lead heading into the final quarter.  The lead was still double digits at 52-40 with 1:55 to play, but the Redhawks went on an 8-0 run to make the score 52-44 with :29 to go.  The Cardinals made a couple of three throws in the closing seconds to take the win.