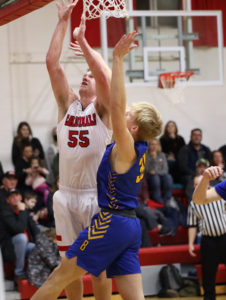 The Dell Rapids St Mary Cardinal boys earned win number 15 on the season with a 64-49 victory over the Baltic Bulldogs at home on Friday, February 19th.

The Cardinals took started the game on a 10-0 run and ended the first quarter leading 21-13.  The lead went back to double digits in the second quarter, and St Mary had a 34-23 advantage at halftime.

St Mary continued to add to the lead in the third quarter as they continued to slowly pull away more.  The Cardinals led 53-35 heading into the final quarter.  The Cardinals scored the first four points of the fourth quarter for a 22-point lead, 57-35.  Baltic went on a 12-2 run to cut the lead to 59-47, but that was as close as the Bulldogs would get in the game.

Connor Libis had 30 points, six rebounds, and three assists.  Libis now has 2,577 points for his career, putting him into a tie for 3rd place in South Dakota career scoring history with Wakonda’s Milt Sorenson.  He has now surpassed Josh Mueller and Chuck Welke.

The Cardinals (15-4) will end their regular season on the road at Emery against Bridgewater-Emery on Friday, February 26th.