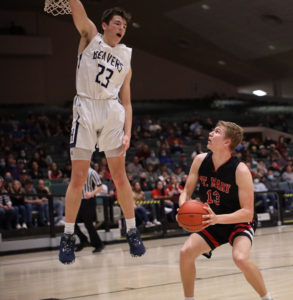 It’s been sixteen years since the Dell Rapids St Mary Cardinal boys basketball team has been to the State B tournament.  That changed when the Cardinals posted a 54-45 Region 4B win over Hanson on Friday, March 5th, and then a 58-51 win over the Elkton-Lake Benton Elks in the SoDak 16 on Tuesday, March 9th.

The #3 seeded Cardinals took on the #2 seeded Hanson Beavers at the Mitchell Corn Palace in the final game of the Region 4B tournament on Friday, March 5th.

In a much anticipated match-up, the first quarter was back and forth as many expected.  The Cardinals were able to grab a slim 16-13 lead by the end of the quarter.  St Mary was able to push that lead to four points at halftime, 28-24. 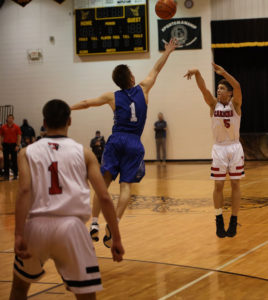 St Mary then traveled to Colman to face a familiar Region 4 and Dakota Valley Conference opponent, the Elkton-Lake Benton Elks, in the SoDak 16 game on Tuesday, March 9th.

The Cardinals again pushed the lead to 15 points outscoring the Elks 9-0 in the first four and half minutes of the third quarter.  St Mary led 45-30 with 3:30 to go in the quarter.  The Elks, however, would not go away.  They ended the quarter on an 11-3 run to pull within seven, 48-41, heading into the fourth quarter.  The Cardinals were able to keep a 10-point lead throughout much of the fourth quarter.  The Elks got within six at 55-49 after an offensive rebound and put back with :31 to go in the game, but the St Mary lead was too big to overcome as the Cardinals took the 58-51 victory to qualify for the state tournament.

The Cardinals will be the #6 seed in the South Dakota Class B State Tournament.  Their first game will be Thursday, March 18th against #3 White River at 7:45 p.m. in Aberdeen.