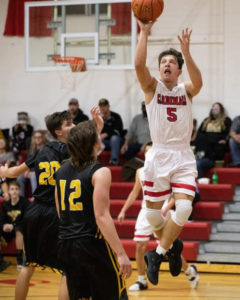 The Dell Rapids St Mary Cardinal boys basketball team had no problem picking up their second win of the season on Friday, December 18th.  On a night the Cardinals recognized their nine seniors, they cruised to a 70-38 win over the Colman-Egan Hawks.

It took a quarter for the Cardinal offense to get rolling, but once they did, Colman-Egan couldn’t stop them.  St Mary only led 11-10 after the first quarter, but that lead quickly grew to 19 points by halftime at 34-15.  The Cardinals hit the 30-point running clock mark in the third quarter and led 55-25 heading into the final quarter.

St Mary (2-0) will travel to De Smet on Monday, December 21st as part of a girls and boys double-header.  Both games can be seen on Big Sioux Media.