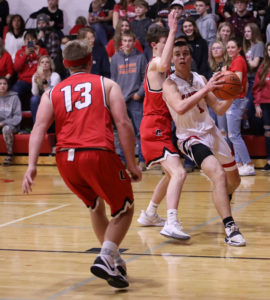 It wasn’t easy, but the Dell Rapids St Mary Cardinal boys won their first game in the Region 4B tournament, 57-42, over the Chester Flyers at home on Tuesday, March 2nd.

Things seemed to be headed towards an easy victory for the Cardinals after the first quarter, but the craziness that can happen in the post season made itself known.  St Mary was able to get out to a nice 17-5 lead at the end of the first quarter.  Chester, however, kept it close the rest of the game.  The Cardinals were only able to add one point to their lead by halftime, 30-17.

The Cardinals opened the third quarter on an 8-3 run for a 38-20 lead, the largest of the game, with 4:55 to play in the quarter.  The Flyers responded with a 13-5 run of their own to cut the lead down to 10 points, 43-33, heading into the fourth quarter.  Chester got the lead down to eight points, 47-39, with 5:25 to go in the game, but Ashaun Roach-Valandra came up big for the Cardinals in the fourth quarter.  He scored 12 of his game-high 22 points in the final quarter to help St Mary hang on for the win.

St Mary improves to 17-4 on the season.  The win also gave the Cardinals a perfect 8-0 record at home on the year.  St Mary will play Hanson in a SoDak-16 qualifying game against Hanson on Friday, March 5th at the Mitchell Corn Palace.  Tip-off is scheduled for 4:00 p.m., and the game can be seen on Big Sioux Media.