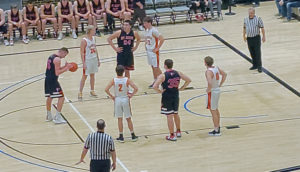 The Dell Rapids St Mary Cardinals had their nine-game winning streak come to an end at the DWU Classic in Mitchell on Saturday, February 13th.  The Canistota Hawks used a late run to hand the Cardinals a 61-56 loss.

Canistota held St Mary to just seven points in the third quarter while scoring 15 for a 47-43 lead heading into the final quarter of the game.  The Cardinals regained the lead at 48-47 with 6:13 to go.  The two teams were tied 52-52 with 2:50 to play, and the Hawks finished the game on a 9-4 run knocking down big free-throws for the win.