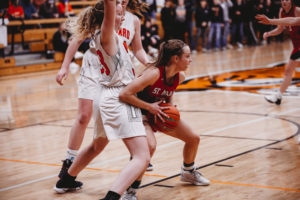 With :18.6 left in the game, the Dell Rapids St Mary Cardinals trailed 47-46 and had the entire length of the court in front of them.  Ella Heinitz dribbled past the Howard Tiger defense, found Courtney Brown wide open in the left corner, and Brown sank the three-point shot with :10 to go.  The Tigers had two shots to tie the game in the final seconds fall off the rim no good, and the Cardinals won 49-47 to advance in the Region 4B tournament.

The battle between the #5 seeded Cardinals and the #4 seeded Tigers was as close and back-and-forth as one might expect for a #4-#5 match-up in Howard on Tuesday, February 23rd.

The game was scoreless for the first couple of minutes until Ella Griffin made a three-pointer.  That shot opened up the scoring as the Cardinals took an 8-3 lead.  Howard got the game tied 10-10, but St Mary finished the quarter on a 4-0 run to lead 14-10 at the break.  The Tigers scored the first five points of the second quarter for a 15-14 lead, but the Cardinals responded with a 9-2 run for a 23-19 lead.  The Cardinals were able to keep the lead and push it to 30-25 by halftime.

Howard came out of halftime and went on a big run.  The Tigers opened the third quarter on a 13-0 run and held a 38-30 lead.  Karlie Klein finally got the Cardinals on the board with 1:55 to play in the quarter.  Madala Hanson made a three-pointer from the right wing to pull the Cardinals within three at 38-35 with about :15 left in the quarter.   The score remained 38-35 heading into the fourth quarter.

The Tigers maintained a three-to-four point lead through much of the beginning of the fourth quarter.  The lead grew to seven, 45-38, after a three-pointer by Kenedy Koepsell.  Heinitz made a shot in the lane to cut the lead to 45-40.  St Mary stole the inbound, and Hanson made another three-pointer with just over 2:00 to play to make the score 45-43.  After a defensive stop, Hanson banked in another three-pointer with 1:37 to go to give St Mary a 46-45 lead.  Kate Conner made two free-throws with :19.6 to give Howard the lead at 47-46.  The Cardinals called a timeout to set up the game winning play.