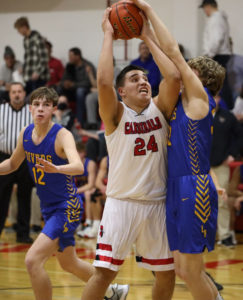 For the second game in a row the Dell Rapids St Mary Cardinal boys used a second quarter rally to spark a win.  The Cardinals went on a 15-0 run to start the second quarter against Lake Preston Divers to help them to a 79-56 win on Thursday, February 4th.

The game was fairly even for the other three quarters of the game.  St Mary had a slim two-point lead after the first quarter at 15-13.  The Cardinals, after their 15-0 run to start the second quarter, pushed the lead to 30-13.  The first half ended with St Mary leading 39-21.

The Cardinals were able to extend their lead to 25 points in the third quarter at 52-27.  The Divers went on a 10-0 run of their own and cut the lead to 52-37.  St Mary entered the fourth quarter leading 56-38.  The Cardinals maintained their lead and outscored Lake Preston 23-18 in the final quarter.

The Cardinals (12-3) will travel to Arlington on Monday, February 8th for their next game.