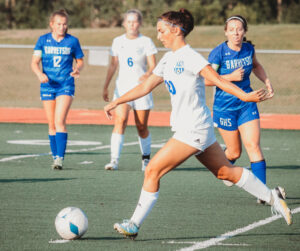 Both the West Central Trojan girls and boys soccer teams were in action on Tuesday, September 6th.

The boys hosted the Tea Area Titans.  The Titans scored nine times in the first half of the match and then added three more in the second half for a 12-0 win.

The girls team traveled to Garretson to play the Blue Dragons.  The Trojans kept their winning streak going with a 6-1 win.  The goal scored by Garretson was just the second goal allowed on the season by West Central.  The other goal scored was by St Thomas More on August 27th.