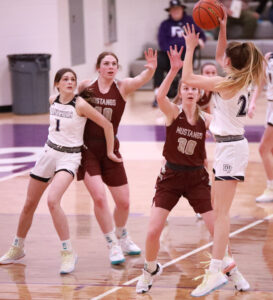 Photo taken and used with permission by Heidi Huwe

Tri-Valley ended the first quarter leading 14-12.  The Panthers flipped the lead to themselves and held a 26-24 advantage at halftime.  Dakota Valley started the third quarter on a 10-0 run and outscored the Mustangs 24-8 in the quarter for a 50-32 advantage.  Tri-Valley got the lead down to single digits in the fourth quarter, but ran out of time.