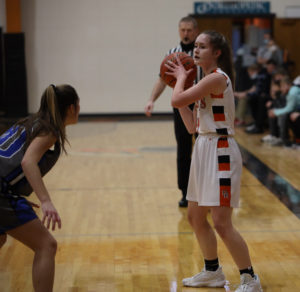 The Dell Rapids Quarrier girls fell victim to a big third quarter by the Mt Vernon/Plankinton Titans on Tuesday, February 9th.  The Titans defeated the Quarriers 61-34.

The game was much closer than the score might indicate for three of the four quarters.  The game was tied 7-7 with 2:22 to play in the first quarter.  The Titans had a four-point lead by the end of the quarter, 16-12.  Mt Vernon/Plankinton extended their lead to eight points at 27-19 by halftime.

Dell Rapids (4-14) will host the Dakota Valley Panthers on Friday, February 12th.  The game can be seen on Big Sioux Media.