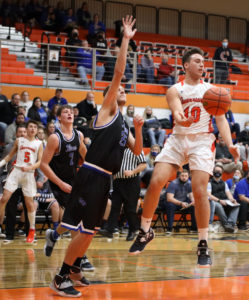 The Dell Rapids Quarrier boys outscored the Mt Vernon/Plankinton Titans 27-13 in the third quarter to help them to a 82-55 win at home on Tuesday, February 9th.

Dell Rapids had a scoring advantage in every quarter, but the difference in third quarter was the big difference in the game.  The Quarriers led 17-12 at the end of the quarter and only led by six points, 33-27, at halftime.

The Quarriers (11-4) will host the Dakota Valley Panthers on Friday, February 12th.  The game can be seen on Big Sioux Media.