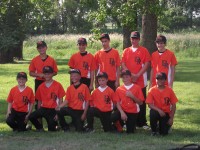 The 2012 Dell Rapids All-Star Little League team was selected a little more than a week ago, and the team won it’s first warm-up tournament over the weekend.  The team was selected by their peers in closed ballot voting among the three midget teams.  In their first games playing together as a team, they won all three games.

Dell Rapids beat Flandreau 8-0 (run rule in 4 innings) in the second game.  Matt G. and Eddie P. combined to pitch a shutout.  Matt G. also added a double and 2 RBI.  He was the winning pitcher.

In the championship against Madison, Dell Rapids won 8-5.  Keegan M. had a triple and 2 RBI. Austin E. added 2 singles and 2 RBI, and Carter G. had a double with 2 RBI.  Blake R. picked up the win in relief.