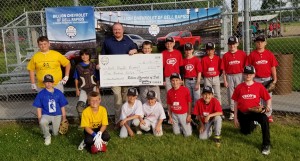 Billion Chevrolet of Dell Rapids, as part of the Chevy Youth Baseball initiative, donated $500 cash to the Dell Rapids Baseball Association this year along with over $1,000 in baseball equipment.

On Monday, June 10th, Travis Peterson, Sales Manager at Billion Chevrolet of Dell Rapids, presented the $500 check to the Dell Rapids Baseball Association on Field C in City Park.  Several Dell Rapids youth baseball players from various teams in Dell Rapids were at the field to receive the donation.

The Chevy Youth Baseball initiative has been donating equipment to the Dell Rapids youth baseball program for the past few years.  The equipment has come in the form of catcher’s sets, L-screens, bat racks, baseballs, drop bases, tees, bat bags, scorebooks, umpire clickers, and more that continues to be used year after year.

Other sponsors of Dell Rapids Baseball include:

The cut-off date for each division ins May 1st.  The cost of the Coach Pitch and Transition League divisions is $45.00.  The cost for the Pee-Wee and Midget divisions is $55.00.  A $5.00 off coupon will be automatically deducted from the cost if the player re-uses the hat from last year.

To register for the 2016 season, go to the Dell Rapids Little League website, www.dellrapidsbaseball.com, and click on DR Online Registration link. 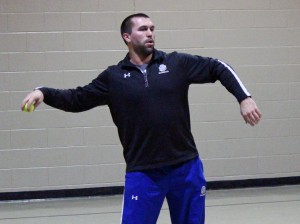 Coach Schrage said, “What a great thing to talk baseball in the middle of January in South Dakota.  We like going around doing it because I’ll be honest with you, when we leave tonight hopefully we learn something.  There’s not one way to do something.”

Coach Grunzke added during his demonstration, “There’s different ways to do things.  I didn’t invent things.  Most kids are pretty athletic if you let them be athletic.” 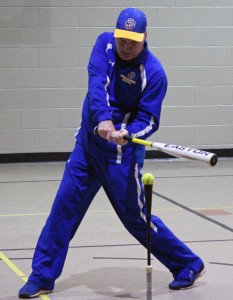 The coaches that attended the clinic ranged from coaching 6U baseball all the way to Legion baseball in Dell Rapids.  The coaches saw demonstrations on throwing drills, hitting drills, and pitching drills.

The clinic was free to the coaches that attended and was promoted by the Dell Rapids Baseball Association and Dell Rapids Little League.  Members of both the DRBA and DRLL boards were please with the turnout to the clinic. 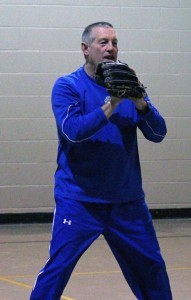 The coach pitch teams played games against not only themselves, but also against teams from Flandreau and Tri-Valley.  Their season ended on Wednesday, June 24th.  The transition league teams played against teams from Dell Rapids, Baltic, Flandreau, Tri-Valley, and Humboldt.  The transition league season concluded with an “End of the Year” tournament on Sunday, June 28th, during Quarry Days.

“This tournament is a great way for teams to get a chance to play other teams they don’t see on a regular basis in their leagues.  This year was a fantastic tournament…all the teams seemed to be pretty evenly matched.  Most of our games were decided by just a couple of runs, and I think if not all the teams won a game this weekend, a large majority of them did,” said Dell Rapids Little League President Matt Larson.

This year’s tournament was divided into four pools of three teams each.  Each team played the other two teams in their pool during games on Friday and Saturday, and then the each team was given an additional game on Sunday.  The four pool winners competed in a championship round to determine the champion of the tournament.

“We had a lot of excitement all weekend long.  At any given time during the weekend, there were cheers erupting from at least one diamond if not more.  That’s what it’s all about for us.  We love seeing and hearing kids getting exciting about the game.  Our board members heard on many occasions from coaches all weekend that not only were the kids exciting about playing, but the coaches themselves learned that some of their players could play different positions than what they normally play when they were asked to do so.  That’s another reason we love hosting this tournament,” Larson said.

Superior Homes from Brookings emerged as the 2015 champion after defeating the Crooks Stangs in the final game on Sunday afternoon.

Larson also added, “I want to thank all the volunteers who gave their time to help make this tournament a success.  Not only did we luck out with weather this year, but we had so many helpers to make the tournament run smooth.  We had folks who worked on preparing fields before games, worked in the concession stand, organized all the umpire assignments, donated home-made goodies or hot dogs….all those things help make this tournament a success.  A lot of these things may go unnoticed, but our board appreciates every bit of help.  The Dell Rapids Little League community steps up year after year from the players, to parents, to coaches and board members to make sure we put on the very best tournament we can, and I can’t thank them enough.”

Madison and the SF Rockets were declared the Co-Champions of the 2014 Dell Rapids 12U Tournament in a rain-shortened championship game.  The game had to be stopped in the third inning as law enforcement sent teams home after funnel clouds were spotted in Sioux Falls prior to thunderstorms and rain hitting the Dell Rapids area.

The coach pitch teams played against each other as well as against three Crooks teams and one Colton team this year.  The Coach Pitch league ended their season on Monday, July 1st, with the players of the four Dell Rapids teams each receiving a medal after their last game for participating in the league this year.

The Pee-Wee teams participated in the MinnDak League again this year with all four teams having a very successful year.  ERC finished the regular season in first place and qualified for 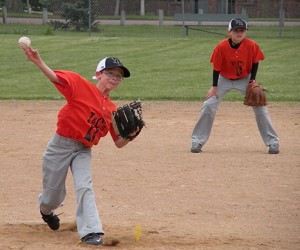 Dell Rapids played host to a Little League baseball tournament on June 1st and 2nd.  15 teams from Fargo, Brookings and Dell Rapids participated in the annual weekend tournament.  After a cold, cloudy and windy day on Saturday, the weather changed dramatically on the final day.  Sunday provided the ball players and spectators alike with sunshine and great temperatures for the final day. 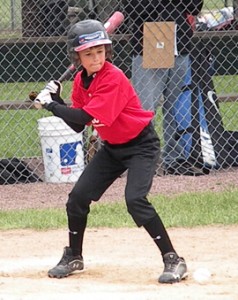 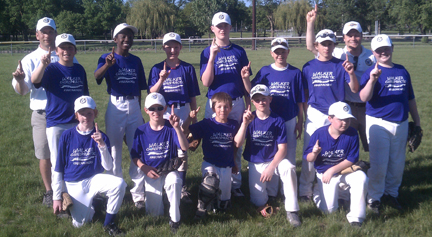 The registration period has begun for the Dell Rapids Little League for the 2013 season.  Forms were sent home with the boys from school.  They can also be picked up at City Hall or downloaded from the Dell Rapids Little League website, www.dellrapidslittleleague.com, on the Handouts tab.  All the forms need to be turned in by March 15th back to the schools or to City Hall.