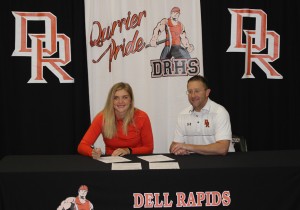 Dell Rapids senior Sydney Stofferahn signed her letter of intent to play basketball for Northern State University on Wednesday, November 8th.  Stofferahn is a 6’3″ starting center for the Quarrier girls basketball team.  Last season she shot 72% from the field, 50% from three-point area, and 74% from the free throw line.  She averaged 8.2 rebounds and 4.6 assists per game.  Stofferahn was also an honorable mention for Dak XII All-Conference.

Northern State University women’s basketball head coach Curt Fredrickson said in a press release, “We are very excited about this class.  They are a very athletic group, whose size and length are huge assets on the basketball court. In addition, they are great students which will make an instant impact both on the basketball court and in the classroom.”

Dayton Beach, Fla. – Northern State University seniors, Channing Barber and Chad Stoterau will represent the Wolves in the 7th annual National Bowl this Sunday from Daytona Beach. The defensive duo was named to the All-NSIC First Team this season. They led the Northern State defense with a combined 132 tackles in 2016 and have been mainstays for the Wolves the past four seasons. Both Barber and Stoterau will play for the American Team in white, with Barber donning his usual #22 and Stoterau taking over #90.

“I think that the thing I’m looking forward to is playing against Division I players, and seeing how I match up against bigger school guys,” noted Barber. “It is a huge opportunity to play in front of NFL and CFL scouts, and also a lot of agents. It’s exciting to get to play another game especially how the last game ended and it’s going be a in Florida, so it will be fun to play in nice weather and not snow.”

Players travel to the National Bowl weekend from as far as Texas, Arkansas, Oregon, Colorado, Michigan, Utah, South Dakota and more. The FCS National Bowl and National Bowl Game are presented by East Preps LLC and founded by its owner Michael Quartey Esq., also a Professor of Sports Law at Holy Family University in Philadelphia, PA.

The rosters gives NFL/CFL scouts a chance to view and get to know some of the best players from smaller schools over the bowl weekend. The FCS National Bowl is coached by pro coaches and features coaches such as NFL Coach Mike Stock formerly of the Green Bay Packers, who is set to return and coach the FCS Bowl for the 2014 game in Miami, FL. The game has been attended by scouts from the NFL’s St Louis Rams, Kansas City Chiefs, Atlanta Falcons, Miami Dolphins, Oakland Raiders, San Francisco 49ers, Philadelphia Eagles, Chicago Bears, and has even seen scouting directors fly in.  With its location in at FIU in Miami, the bowl weekend continues to gain scouts attention.. All 32 NFL teams receive and review the FCS National Bowl film as the game and practice film are distributed directly to all NFL teams by NFL Films. 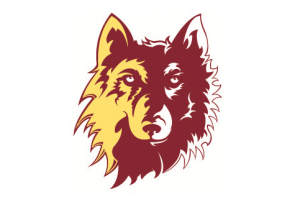 Channing Barber, a 2012 graduate of Dell Rapids, was named this week’s NSIC Defensive Player of the Week for his play for the Northern State University Wolves 51-35 win over Southwest Minnesota State University on Saturday, September 10th, that was ESPN’s NCAA Division II Game of the Week.

Barber also earned Qdoba Scholar Athlete of the Week honors and is up for the D2 Football HERO of the Week.  Votes can be cast for Barber by clicking here.

Dell Rapids natives Zach and Channing Barber were named to the 2013 NSIC Fall All-Academic Team.  Both of them play football for the Northern State University Wolves in Aberdeen.  To be eligible for this honor, they have to be a member of the varsity traveling team and have a cumulative GPA of 3.20 or better. Also, they must have reached sophomore academic standing and must have completed at least one full academic year at the institution.  Not only were Zach and Channing named to the All-Academic team, they were on the dean’s list for the spring 2013 semester at NSU.  Both of them were honored under the “Full Time students 3.50-3.99” category.