Both Dell Rapids St Mary and Dell Rapids held their coronation ceremonies on Monday, October 11th as part of the homecoming week.  Both schools crowned their Homecoming King and Queen during the ceremonies.

The Dell Rapids Homecoming King is Weston Mason, and the Homecoming Queen is Yazmin Garcia.

The week will continue with activities at both schools.  The homecoming parade will be held at 1:00 p.m. on Friday, October 15th downtown Dell Rapids.  The Cardinals will host De Smet for their homecoming football game, and the Quarriers will host Dakota Valley.  Both games will kickoff at 7:00 p.m. 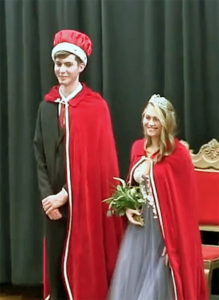 After having school shut down during the original homecoming week in October, Dell Rapids St Mary is making sure students still get to have a homecoming in the 2020-2021 school year.

The Cardinals are having their homecoming celebration this week, January 11th – 15th.  The festivities started with coronation on Sunday, January 10th.  Thomas Eining was crowned the Homecoming King and Macie Brown was named Homecoming Queen.

Homecoming for both Dell Rapids St Mary and Dell Rapids High Schools is scheduled for the week of October 12th – 16th.  However, this year things will look vastly different than years past due to the Covid pandemic.

The biggest change this year is that there will not be a community-wide homecoming parade this year.  Traditionally the two schools and the community come together for a parade that runs through downtown Dell Rapids, but because of limited social distancing options and increased interpersonal interactions from a community-wide parade, the schools have decided not to have one this year.

Dell Rapids St Mary will be having their own “mini” parade around the school.  Their parade will start in front of the school on State Ave and move south to 8th St.  The parade will then go east on 8th St to Garfield Ave before turning north and ending on the corner of Garfield Ave and 9th St.  Other changes to the St Mary homecoming celebration include a change to the coronation.  This year’s coronation will be held on Sunday, October 11th at 3:00 p.m. and will be open only to senior parents and the student body, but the event will be streamed on the St Mary YouTube channel.  A pep rally will be held on Friday, October 16th at 9:30 a.m., but that too will be limited to students only.  An “Olympics” event will be held on Friday at 9:45 and will be open only to the senior parents.

Dell Rapids public school is still finalizing some of the standard homecoming activities such as the royalty court.  The school announced in an email to parents that there will not be a homecoming dance  held this year.   Some other activities being planned are a “reverse parade” for the elementary and middle school students, as well as a pep rally.  Both of those activities will be held during the school day and not open to the public.  More building-specific details on activities will be shared with students in the coming days.

At this time, both of the homecoming football games are planned to played as scheduled on Friday, October 16th.  Both games are scheduled to start at 7:00 p.m.